The Mulga Tank project is located 250 km northeast of Kalgoorlie in the eastern Yilgarn region of Western Australia and approximately 150km southwest of the Tropicana deposit being developed by Independence Gold and Anglo Ashanti Gold.

Within the project areas, Archaean bedrock is frequently masked by sand plains and the western margin of a large dune field, comprising aeolian quartz sands. Outcrop is limited to the north-western corner of E39/1072.

E39/988 (Mulga Tank) and E39/1072 (Mulga East) cover parts of an little-explored Archaean greenstone belt which includes the Minigwal Dunite or peridotite, a large, strongly magnetic, near circular body of 3-4km diameter, and a narrow west-north-westerly trending greenstone belt, that is interpreted to comprise ultramafics, mafic volcanics, volcanic and sedimentary rocks, fault bounded against granite. The sequence strikes northwest in the northern two thirds of the project area, and west-southwest in the southern third. Granite bounds the greenstone sequence to the east and west, and has also intruded central parts of the belt.

Following the success of the Mobile Metal Ion soil sampling programs of 2010 and 2011, joint venturer Endeavour Minerals (purchased by Impact Minerals Ltd (ASX:IPT) in 2013) undertook a further soil sampling programme, on 400 x 400 metre spacing with infill to 200 x 200 metre spacing over selected areas. This was completed over a period of several months during the year. In total 1,113 samples were collected covering four zones. The main aim of this program was to test the northwest trending structural pattern within licence E39/1513, the interpreted mafic/ultramafic stratigraphy in the ‘pan-handle’ magnetic feature related to the Minigwal Dunite to define drilling targets within E39/988, infill sampling in the zone of maximum gold anomalism in the vicinity of a greenstone/BIF unit intruded by granite to assist in drilling target generation within adjacent tenements E39/1072, E39/1439, E39/1440, E39/1441 and E39/1442.

Gold values range from 3.7 ppb to a maximum of 44.1 ppb Au. Results were compiled and targets selected for the next phase of drilling. 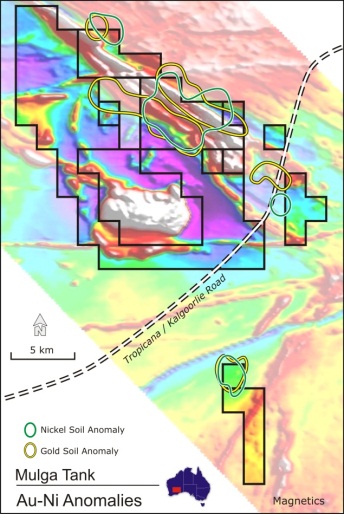 Following are edited extracts from Impact Minerals’ reports to the ASX:

A drill programme was planned  test seven coincident electromagnetic (EM) and nickel-cobalt-in-soil anomalies identified by Impact on E39/988 in which Impact purchased a 20% interest from third parties and has the right to earn a further 50% interest (total 70%) as part of the Mulga Tank Joint Venture with GCR.

Recent further interpretation and modelling of the ground EM data highlighted the possible geometry of the conductors and demonstrates strong coincidence with the soil geochemistry. Importantly the time constants for the EM conductors range from 20 milliseconds to 175 milliseconds which are similar to those seen in many massive sulphide deposits. However investors should note that other sources of high conductivity are possible.

One of the EM conductors on the western side of the Mulga Tank Dunite lies immediately north of a previous diamond drill hole. This hole returned an intercept, from 202 m depth, of 11 m at 0.37% nickel, including 1 m at 1.12% nickel, 0.5 g/t PGE and 260 ppm cobalt.

This zone of mineralisation contains magmatic nickel sulphides and the proximity of this to the EM conductor is encouraging.

Drilling has, according to Impact Minerals, confirmed the presence of two nickel-copper mineralised ultramafic units that extend for at least 150 metres along strike and which both thicken considerably from west to east to define the south-western edge of a “flow channel” as shown below. 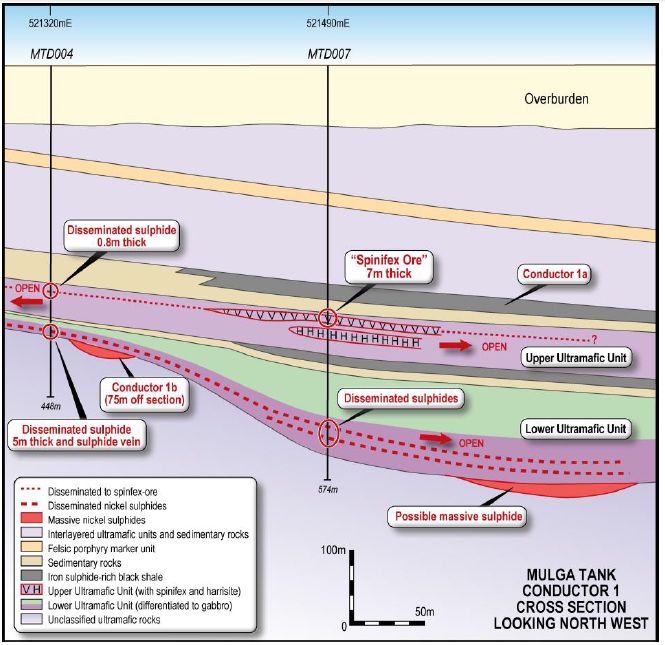 Significant follow-up work including drilling required throughout the project area

Impact Minerals announced that assays from its maiden drill programme at the Mulga Tank Project 200 km north east of Kalgoorlie have confirmed the widespread presence of nickel and copper sulphide mineralisation over an area of about 15 square kilometres within and close to the Mulga Tank Dunite within E39/988. Twelve new priority target areas for nickel-copper and copper-gold deposits have been identified by from previous soil geochemistry data covering a very poorly explored part of the Mulga Tank Project.