GCR’s flagship copper-gold project containing a resource of 310,000 tonnes of copper and 890,000 ounces of gold within a constrained optimised open pit. 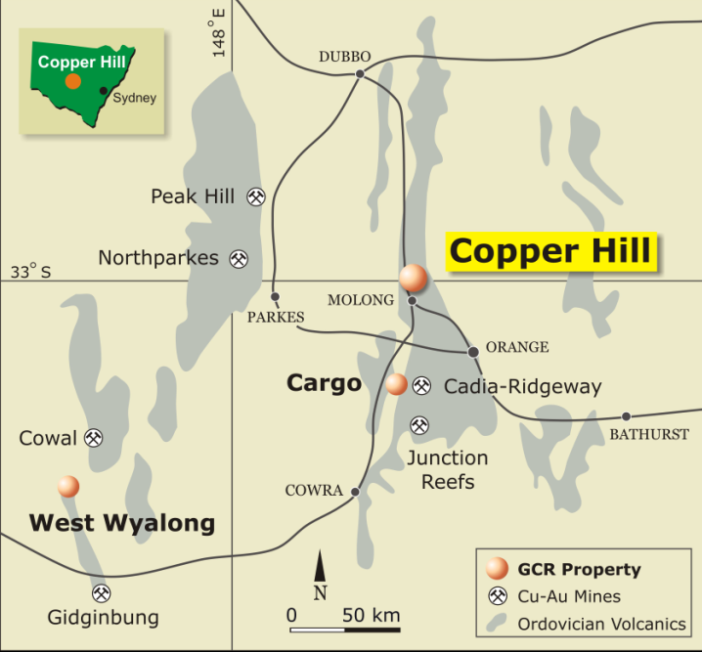 Copper Hill is the Company’s most advanced project being at the Pre-feasibility Study (PFS) stage.

It is typical porphyry copper-gold system containing several adjacent mineralized zones, most of which remain open at depth, and in some cases also along strike. Global resources of 87 million tonnes (Mt) at 0.32 percent (%) copper (Cu) and 0.27 grams per tonne (g/t) gold (Au) have been outlined by drilling to date with strong potential for further resource growth through exploration.

Importantly the Copper Hill and Buckleys Hill deposits contain higher grade resources totaling 28Mt at 0.56% Cu and 0.53 g/t Au concentrated in the upper portions of the mineralised system and open at depth. Consequently the bulk of this resource is potentially extractable by open pit mining. The project also enjoys excellent infrastructure and support from by the Molong community. 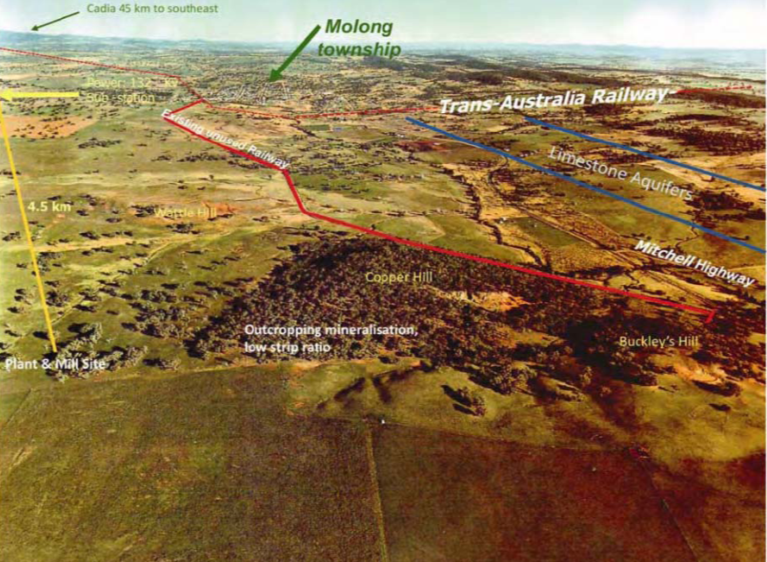 Figure 2. Copper Hill – Aerial view from North showing key infrastructure elements and the town of Molong in the middle distance.

Prior to 2015 project activities focused on development of the global (0.3% Cu) resource. Given the relatively low grade of this resource and modest metal recoveries this led to considering relatively large throughput (5 – 10 Mt per year) operations. The results indicated that while the project was technically feasible it required additional resources and/or strong commodity prices to be financially robust.

During the first quarter of 2015 Golden Cross Resources undertook a Scoping Study on a 2 – 3 Mtpa operation extracting the higher grade, relatively shallow, portion of the deposit. This study sought to leverage off;

The Scoping Study focused on the extraction of higher grade, better performing mineralization and treatment through a 2 – 3 Mtpa process plant utilizing the well proven floatation process to produce a copper-gold concentrate for sale. The study leveraged off previous work, in particular the Scoping Study completed by Calder Maloney in 2010, with emphasis on leveraging off recent work and the intrinsic characteristics of the higher grade ore as well as utilizing fit for purpose equipment and infrastructure and current contract and material supply costs.

The Copper Hill Project is located near the northern end of the Molong Rise (Figure 3) within the Lachlan Fold Belt and consists of Ordovician to early Silurian Molong Volcanics interpreted as an ancient island arc system that has been intruded by many small stock-like dioritic to dacitic bodies from Ordovician to Middle Devonian times (Chivas and Nutter 1975). 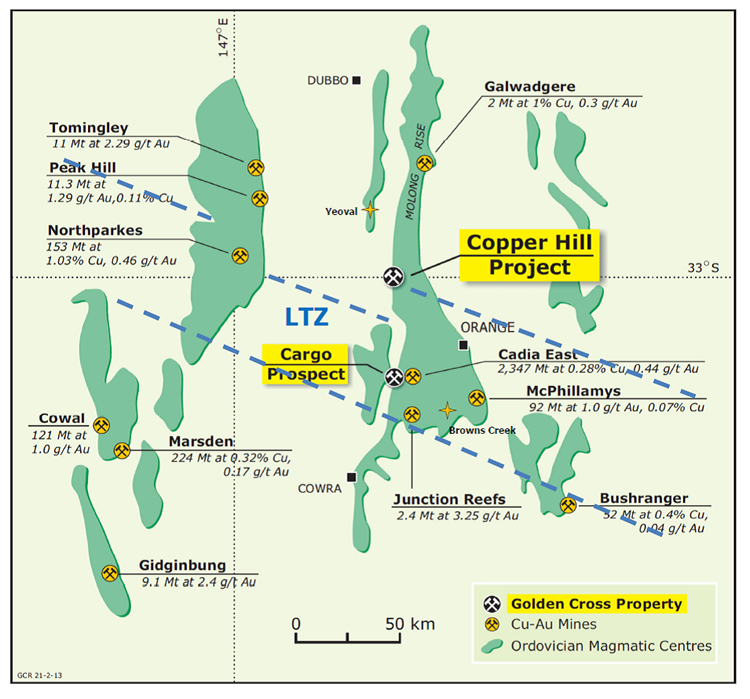 Five mineralisation stages and one supergene stage have been identified in recent work based on inspection of oriented diamond drill core and surface mapping, linking specific mineral species occurrences and associated porphyry system vein sets to corresponding northwest, north-south and northeast structural trends (with reference to Copper Hill Local Grid – CHG).  In general the copper and gold grades are determined by the abundance of chalcopyrite + bornite, that overprint and commonly lie within, earlier sheeted and stockwork quartz magnetite veining.  The higher grade zones are generally associated with more intense veining (generally stockworks) and lower grade zones with less intense veining.  The association between mineral species (in particular chalcopyrite + bornite), vein styles, sample copper and gold grades and prevailing local structural trends has been used in the current study as a basis to model mineralisation domains to constrain resource estimation.

The higher grade zones typically contain moderate to intense stockwork veining and occur in areas where concentrated northwest structures and veins intersect north-south structures and can be continuous over strike lengths of 500 metres (see Figure 5) and at least 200 metres down dip. The highest grade cores of these zones are interpreted to plunge steeply to the north parallel to the intersection of the dominant NW and N-S mineralised structures.

Drill intercepts cutting these “cores” can deliver high grade copper and gold results over broad intervals as shown by GCHD 470 which intersected 155 metres at an average grade of 0.93% Cu and 2.6 g/t Au including 60 metres at 1.83% Cu and 5.4 g/t Au (See Figure 4). Future drilling will target the extensions of these high grade zones, mainly down plunge. 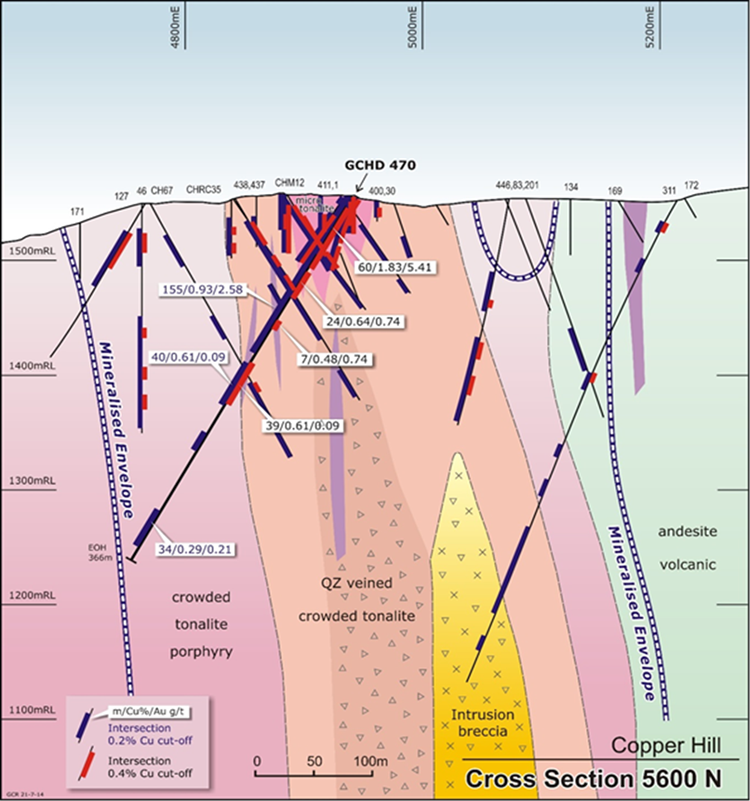 Alteration and mineralisation at Copper Hill occurs over substantial spatial and temporal spans across the porphyry-epithermal continuum.  Alteration style is directly linked to mineralisation/vein style.

The updated Copper Hill Scoping Study is based on the updated JORC 2012 compliant Resource Estimate released to ASX on 24 March 2015. This estimate builds on the improved geological understanding of the controls on the mineralisation overall and honours the structural controls and geology of higher grade mineralisation. The results are summarised below in Table 1.

The 28Mt higher grade resource highlighted in Table 1, and its Indicated and Inferred Mineral Resource components calculated using a 0.4% copper cutoff, is a primary input to the Scoping Study. 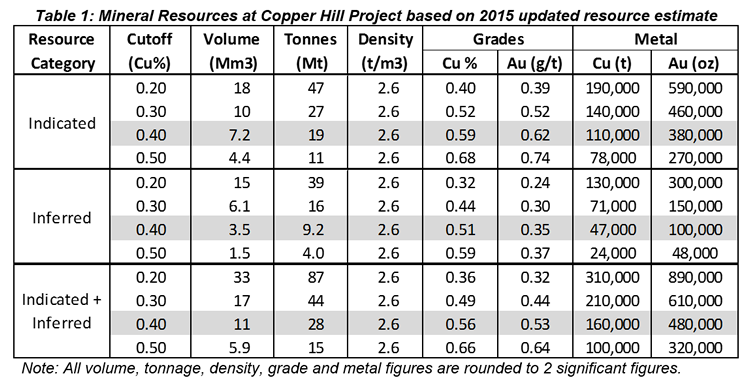 Extended higher grade profiles for both copper and gold in the early years of operation show the benefit of the updated resource model and geological interpretations.

Significant mineralisation remains outside the Revenue 1 Factor pit shell defined for the Scoping Study as shown in Figure 4.  This highlights the potential to increase the material within the pit shell as well as at depth. These areas will be targeted as a part of the PFS drilling. 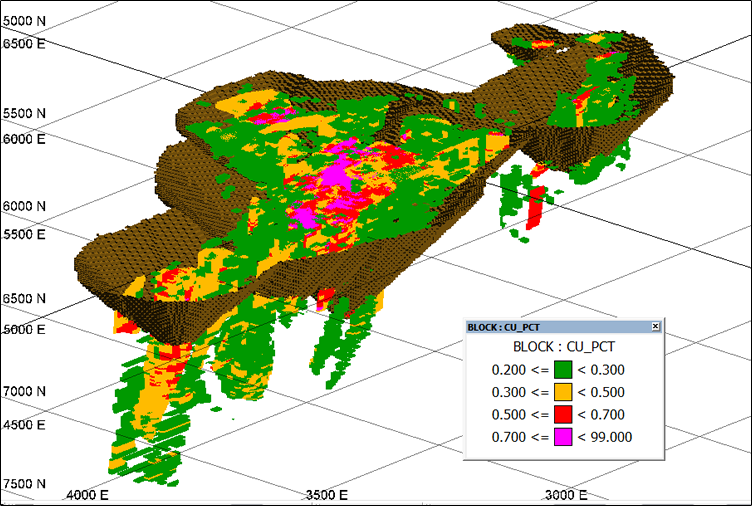 Figure 6 shows the yearly average copper and gold recoveries from the strategic schedules and based on applying the scoping level grade recovery relationship on a block basis as a part of the pit optimisation.

The focus on higher grade material significantly improves expected recoveries for both copper and gold, compared with the flat recoveries of 75% for copper and 45% for gold used in previous optimisations. Continued improvement in metallurgical performance is expected in the PFS as testwork programs focus on higher grade material from early in the scheduled Mine Life.

The updated Process Plant estimate from CPC Engineering provided an approximate 20% saving in mechanical equipment costs compared with the previous 2012 estimate for 2Mtpa Concentrator Plant options and highlights the market shift that has occurred since the previous project estimate for similar fit-for-purpose equipment. 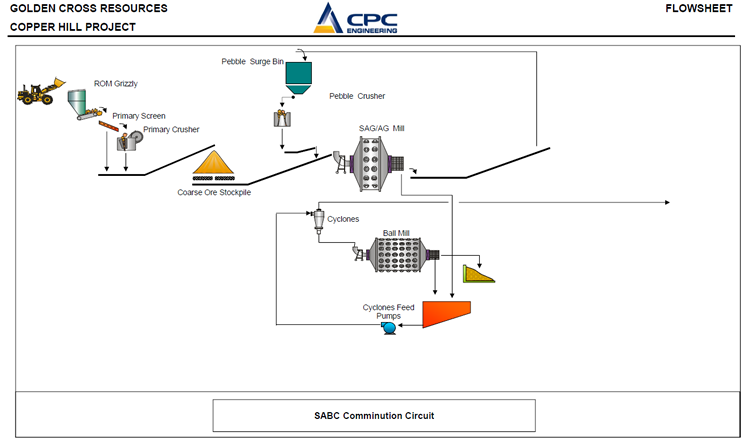 Golden Cross believes there is further potential to reduce capital costs in the Non-Process Plant or “Other” project areas and these will be targeted during the PFS to further reduce the total project capital requirements for the project.

The average life of mine Operating Costs are shown in Table 3.  Mining Costs are on a contract basis and reflect current market conditions, based on recent cost estimates received by Auralia. Process Plant Operating Costs were updated by Golden Cross based on historical manning level and operating cost estimates and updated power costs.  Treatment and refining costs were benchmarked against current industry costs and include concentrate transport costs.

The Company has developed a nine month forward work plan for the completion of a Pre-Feasibility Study into a 2 to 3Mtpa Development at Copper Hill.  Funding requirements for the PFS will include costs associated with targeted exploration and infill drilling at Copper Hill, metallurgical testwork and supporting engineering studies. The key elements of this plan are summarised in Table 4 below; 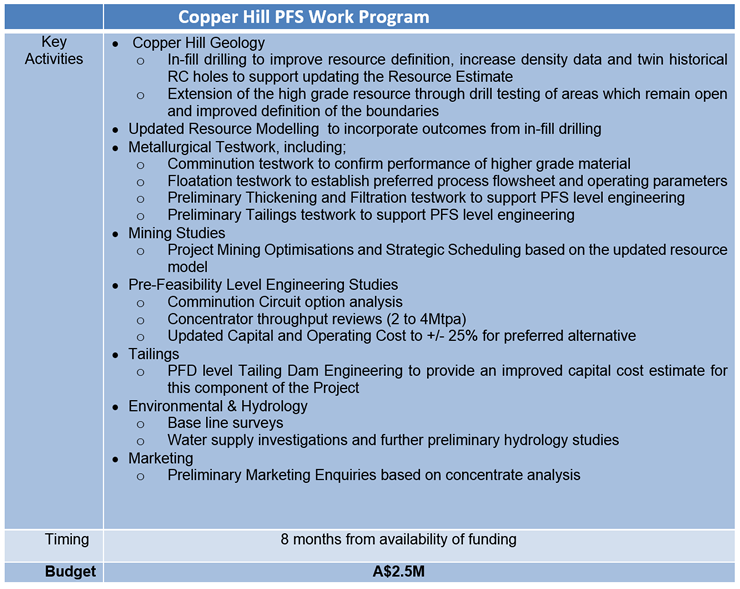 Golden Cross is investigating options for funding of the PFS with the aim of commencing this study, notably resource infill and extension drilling, as soon as possible.

The favourable geological setting of Copper Hill combined with the large size of the mineralised system have long been recognised by Golden Cross. 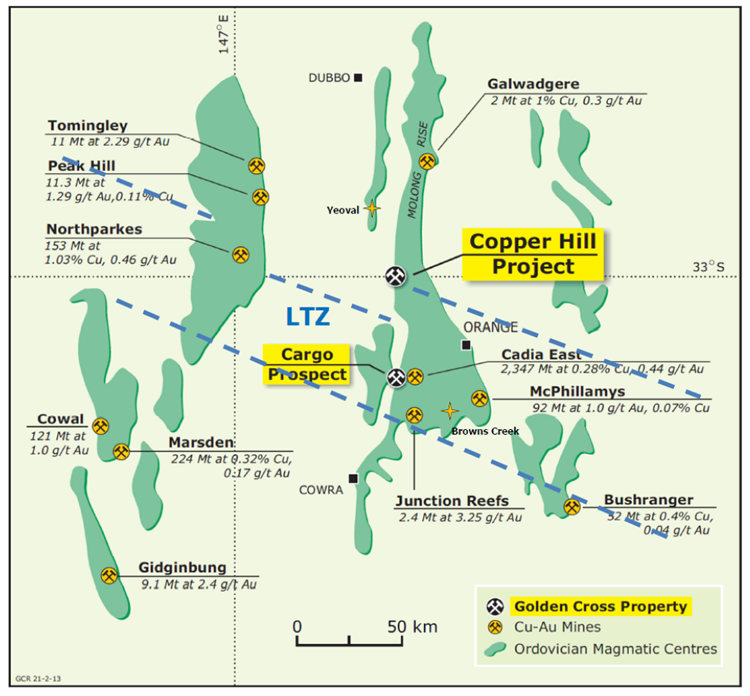 The 2014-15 geological review of Copper Hill has added further to the potential of the Copper Hill mineralising system.  Several areas have been identified with potential for resource expansion and discovery:

While Golden Cross is currently focused on the Copper Hill Scoping Study, it is intended to assess the best options to obtain vectors to target any future exploration activities and drilling. It should be emphasised this remains a conceptual target, supported by mineralisation trends recognised in international studies of porphyry copper deposits.

Beyond the Copper Hill resource several exploration targets remain to be tested. These include; to the south:-

These targets will continue to be prioritised for evaluation and follow-up. 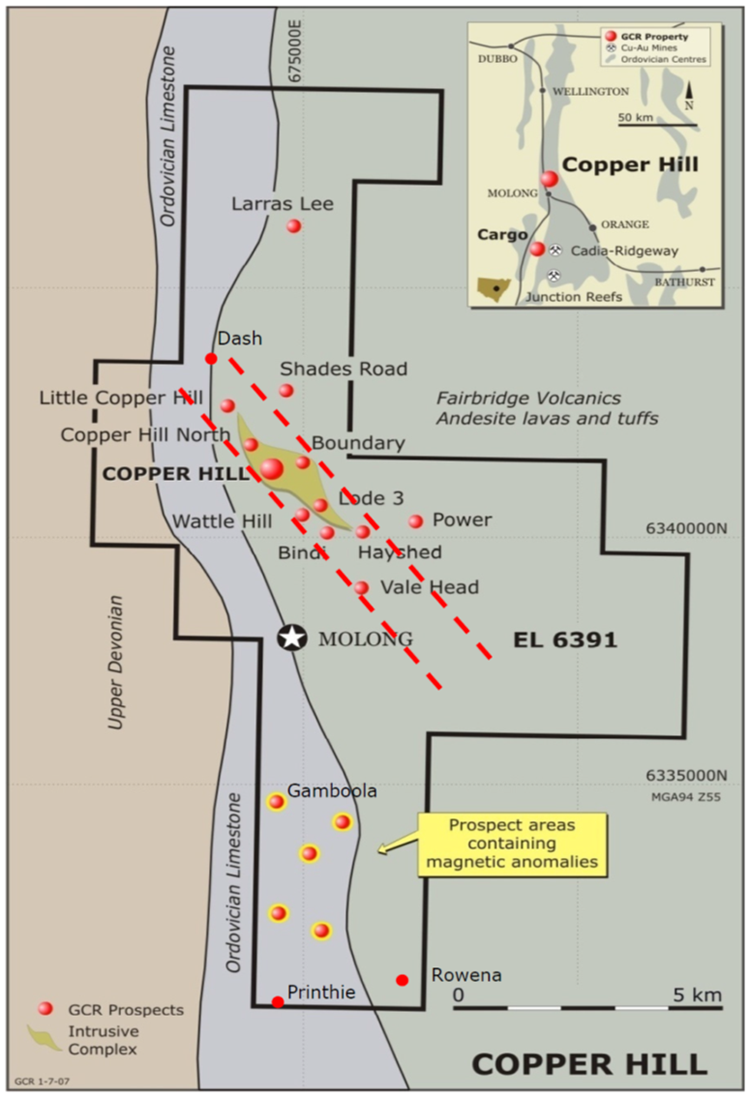 GCR is committed to using the best available tools and technologies to extract value from it projects, especially those which are advanced sufficiently to be in the study phase. Copper Hill is in the PFS stage and is the focus for the Company’s R&D efforts.

Prior to 2014 GCR undertook a significant amount of metallurgical testwork to determine the metal recovery characteristics and develop a suitable flowsheet for the project. At that time the focus was on maximising copper and gold recoveries from the global (lower grade) resources and the results were quite variable with a range of metal recoveries and average figures around 75% for copper and 45% for gold. This compares with around 85% copper recoveries for similar deposits in the region.

The variability is believed to be due to the mineralogical variability within and between samples due to differing physical and chemical characteristics of the mineralisation throughout the deposit.

Accordingly during 2014/15 the Company undertook further drilling to enable additional work to be done to improve the understanding of the various mineralisation types and improve their differentiation so further metallurgical work could improve overall recoveries. This work included;

This work is well advanced and the next stage of metallurgical testwork is planned for the second half of 2015.