The project is subject to a joint venture between Golden Cross, CBH Resources (which took over original participant Triako Resources) and Paradigm Metals, with Paradigm farming-in, operating and sole-funding the joint venture. Paradigm currently holds a 30% interest and has the right to increase that to 51%, at which time Golden Cross will hold 30% and CBH will hold 19%.

A key feature in the exploration rationale at Yellow Mountain is a large buried NNW-trending magnetic anomaly (the Melrose Magnetic Anomaly) which has a strike length of approximately 14km. Almost all of the known mineralisation and geochemical anomalies at Yellow Mountain are associated with this magnetic feature. An outlying section of the tenement hosts the historic Yellow Mountain Mine (Figure 1).

The Yellow Mountain area is located in the Canbelego-Mineral Hill Volcanic Belt. Ordovician siltstones and sandstones of the Girilambone Group are unconformably overlain to the north by the northwest-trending Siluro-Devonian Kopyje Group (part of the Cobar Supergroup).

Locally, the Kopyje Group lithologies comprise tuffs and minor lava flows of the Majuba Volcanics and a variety of tuffaceous sediments. Intrusive rocks in the area include the Devonian Yellow Mountain Granite, a Devonian intrusive quartz-feldspar (dacitic) porphyry and the Silurian Erimeran Granite.

Four main styles of mineralisation are known in the Yellow Mountain area:

The most significant past producer was the Yellow Mountain Mine in the north, which incomplete records indicate yielded 0.365t Cu, 2.74t Pb and 6.16kg Ag. Mineralisation here occurs in veins and stringers associated with altered volcaniclastic rocks of the Fountain Dale Tuff member of the Majuba Volcanics, and typically comprises pyrite-galena-sphalerite-chalcopyrite mineralisation with silver and gold credits. 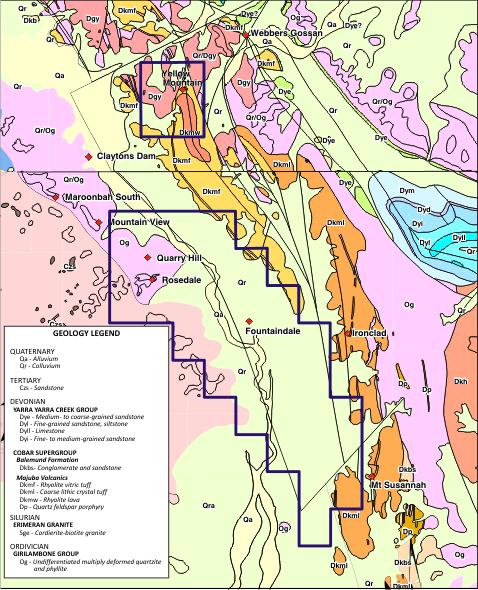 The Melrose Magnetic Anomaly is interpreted to be caused by hydrothermal magnetite alteration around a possible copper-gold porphyry system (Figure 2). Triako drilled some 225 air-core holes over the anomaly to a maximum depth of 90m in 2003-2007, identifying the following geochemical anomalies: 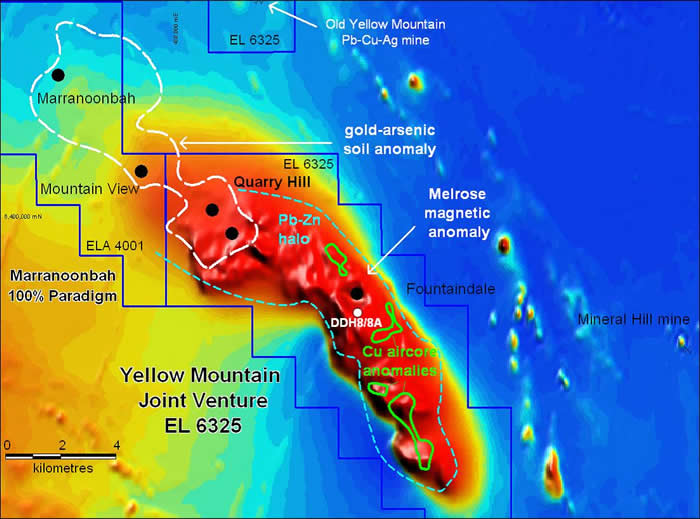 Exploration at Quarry Hill at the northern end of the Melrose Magnetic Anomaly has defined a 4 sq. km gold-in-soil anomaly with associated arsenic. Past drilling by Triako intersected a 30m to +60m thick blanket of low grade oxide gold mineralisation grading 0.2 to 0.4g/t Au from surface. The best intersection was 16m @ 2.7g/t Au from 4m in PDH002.

Paradigm has completed an extensive air-core and reverse circulation drilling program, focusing on the Quarry Hill zone. In 2010, Paradigm drilled 74 air-core holes at the Quarry Hill prospect for 2,567m, targeting disseminated gold mineralisation. The extensive near-surface oxide gold horizon was confirmed with the mineralisation up to 50m thick. Highlights include:

The promising air-core results were followed up in 2011 with an RC drilling program testing for gold mineralisation at depth. A total of 16 vertical holes were drilled for 1,616m and intersected several wide shallow oxidised mineralised zones, with the best intersections being:

Oxidation occurs to a depth of 50-70m in most holes, and gold mineralisation appears to be controlled by multiple low-angle faults within the meta-sandstones and schists.

It is believed that the Quarry Hill South mineralisation lies within a low-angle structure dipping north. Mineralisation is shallow (less than 20m deep) and is open to the west beyond PQS005, with gold grades appearing to be significantly higher than at other Yellow Mountain prospects.

In early 2012, Paradigm collected 22 rock chip samples from the Yellow Mountain Mine area within the northern section of EL6325, to evaluate what had previously been considered to be a base metals target. Five samples returned gold assays of more than 1 g/t Au with maximum values of 5.5g/t Au, 267g/t Ag, 24% Pb and 11%Zn. Four of those had silver assays of over 100g/t Ag. Lead and gold values were shown to be closely related. Paradigm estimates a gold exploration target at the Yellow Mountain Mine of 10-15 million tonnes of shallow base metal and gold mineralisation which could be developed with further work, including further drilling and geophysical surveys.

Do NOT follow this link or you will be banned from the site!