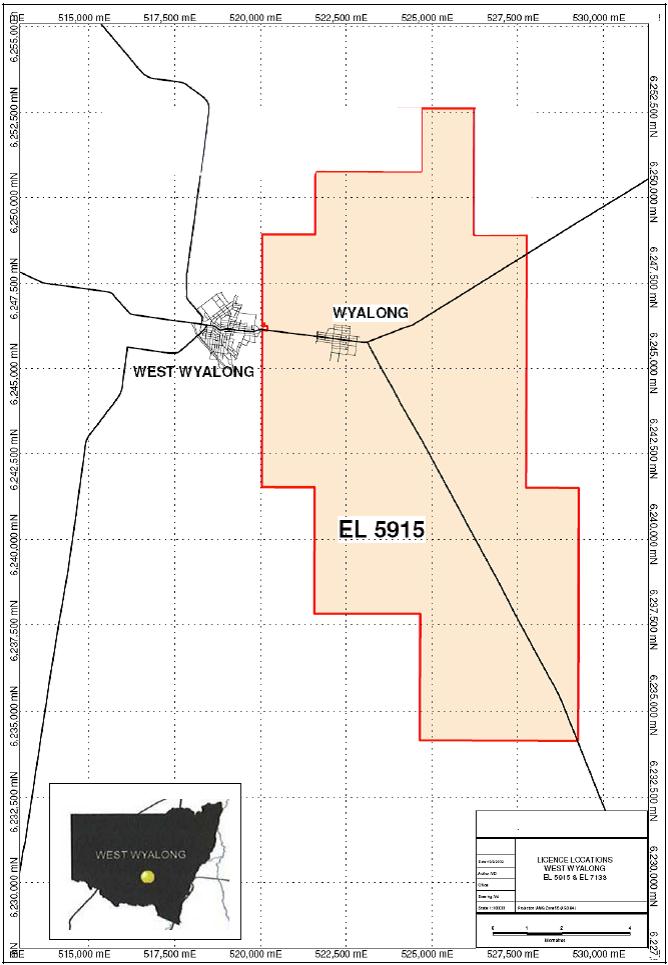 GCR’s West Wyalong tenement (EL5915) is located over the township of the same name in central NSW, 430 km west of Sydney. GCR owns the property 100%, subject to a 2.5% net smelter return royalty to Barrick.

A joint venture agreement has been negotiated with Argent Minerals Limited (AM) whereby it can earn a 70% interest in the West Wyalong project by spending $1.3 million by July 2013.

The exploration licence is host to a magnetic, magmatic complex of Ordovician age located on the Gilmore Suture within the Lachlan Fold Belt. Geological and geophysical interpretations indicate three domains – the Gidginbung Volcanic domain (comprising highly sheared andesitic rocks); the Gidginbung Intrusive domain (comprising a variety of dioritic intrusions with Gidginbung volcanics); and the Bland Diorite domain (where diorite bodies intrude basaltic volcanic rocks). A number of significant gold and copper-gold deposits have been identified regionally along the Gilmore Suture.

The discoveries of the Lake Cowal Deposit (in excess of 2.5 million ounces) 30 km to the north, and Marsden (115 million tonnes at 0.4% copper and 0.15g/t gold) 20 kilometres to the northeast, provide encouragement that large intrusion/volcanic-related hydrothermal systems exist in the area. This, in addition to the recent discoveries at Cadia (near Orange), and Northparkes (near Parkes) showed that the Ordovician age magmatic arc complexes in NSW remain highly prospective for copper and gold.

Within the GCR tenement, Geopeko delineated a sulphide-rich hydrothermal system at Narragudgil (mid 1980s) by testing magnetic anomalies beneath alluvial cover, and further to the south Gold Mines Australia discovered the Mandamah porphyry complex in the mid-1990s.

Due to West Wyalong’s poor outcropping, and deep alluvial and saprolite cover, GCR reviewed geophysical data, which has greatly enhanced the knowledge of sub-surface geology in the area.

GCR has reviewed geophysical data from the West Wyalong tenement, which is essential as the area features poor outcropping, and deep alluvial and saprolite cover. Geophysical modelling indicated that a 21-miligal gravity anomaly in the Pines prospect area was caused by a deep, dense, non-magnetic body – probably a gabbro. This body is about 600m to the top. The magnetic features observed are shallow, near-surface responses and are located above the dense (gabbro) body and within the diorites and basalts of the Bland Domain.

Residual gravity shows a distinctive hole in the gravity high southeast of the Pines, which is interpreted to be a body of less dense rock cross cutting the gabbro. This area is roughly circular and 3 km in diameter, named the “Intrusive Centre”. Interpreted together with all the compiled drill hole and bedrock geochemistry, a broadly concentric pattern is formed at the “Intrusive centre”.

In late 2007, ARD drilled three vertical RC holes to test anomalous gold and copper geochemical anomalies and intersected what may be a previously unmapped gold reef. The drilling was planned around the Intrusive Centre. One hole, APG003, intersected 2m at 19.1 g/t gold from 106m downhole. Holes were also drilled under old workings on five gold reefs, looking for possible depth extensions. This strategy was successful at the Mallee Vale reef in the north of the property, with an intersection of 4m at 6.11 g/t gold from 28m. The Pine Ridge reef, in the west of the property, was also intersected, returning 2m at 1.48 g/t gold from 36m. 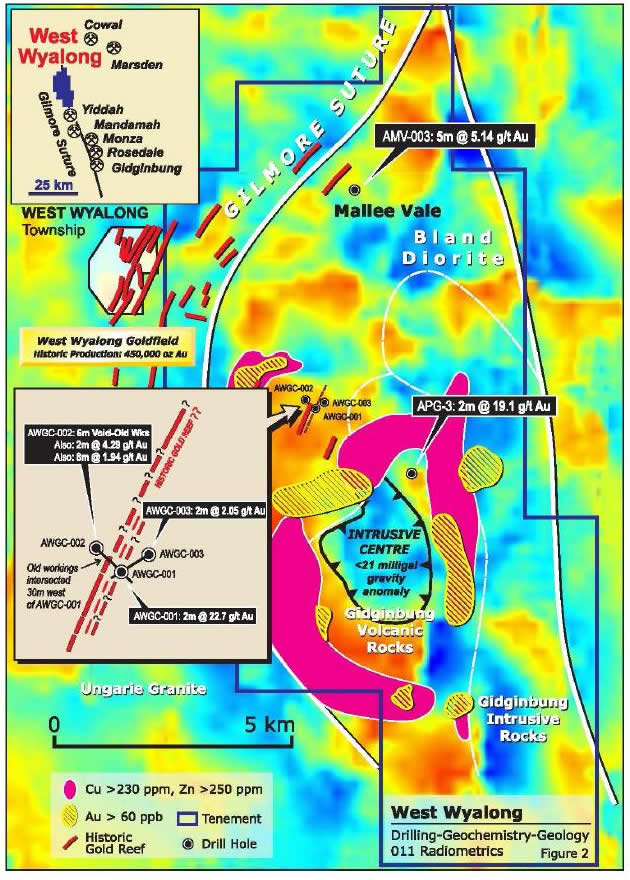 The third hole, AWGC003, was drilled at a right angle to AWGC002 and intersected the expected 2m of mineralisation grading 2.05 g/t gold. AWGC003 did not extend deep enough to intersect the possible westerly reefs. 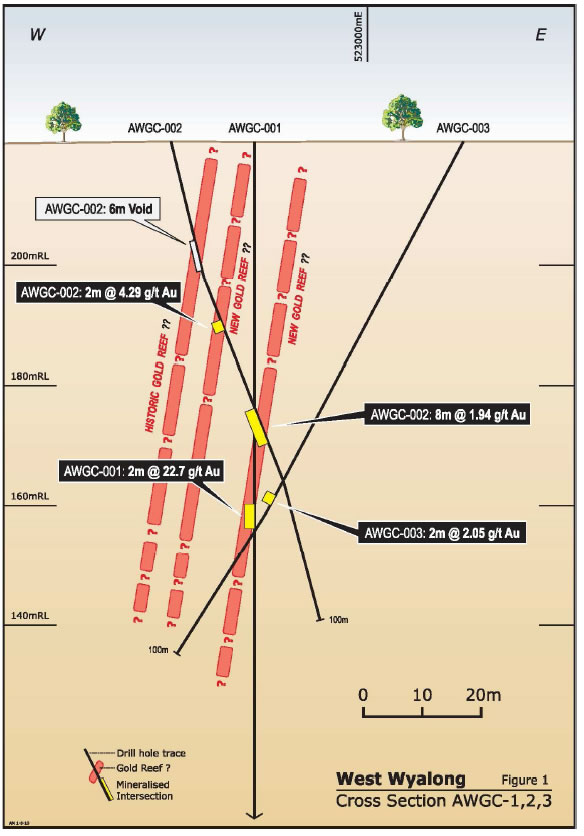