The project is located in the southern part of the Cobar Trough in an area of intermixed volcanic and sedimentary rock intruded by later granites and porphyries. The rocks range in age from about 350 to 420 million years (Siluro-Devonian age). The licence hosts numerous mineral occurrences, old prospects and an historical gold mine, and has been the focus of modern mineral exploration activities since the early 1970s. There are clear geological similarities with the Four Mile Goldfield and the underlying Mallee Bull discovery 20 kilometres to the northeast. 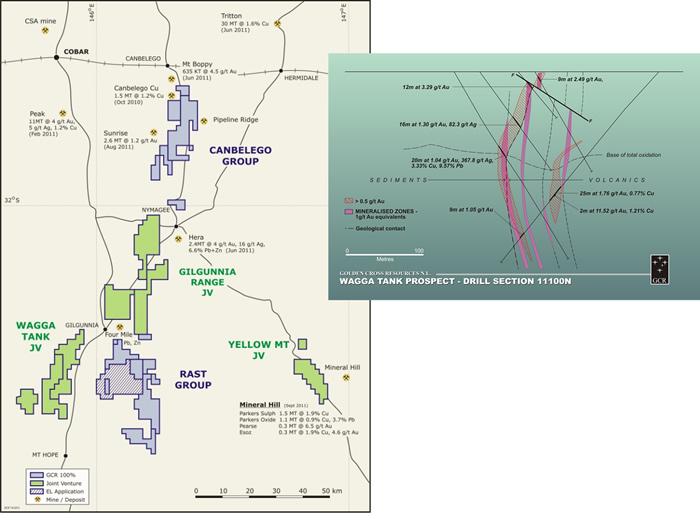 The Cobar region has produced a significant amount of metal since production commenced in 1870, including:

In addition, an exploration program between 1995 and 1999 by Peak Gold Mines identified further resources of 1 million ounces of gold.

There are currently four operating mines in the district. These are CSA, Elura, Peak/New Occidental and Mt Boppy. While all current production and most historical production in the Cobar Basin has come from Devonian rocks, the Girilambone Group (Ordovician) also host the Tritton massive sulphide mine and related deposits, and the Girilambone Copper Mine.

In order to understand the geological setting of the various prospects within the licence area, GCR undertook a comprehensive compilation and review of all existing exploration data. This work suggested that known mineralisation, especially on the western side of the tenement, was preferentially located at the margins of large circular structures visible in aeromagnetic images. 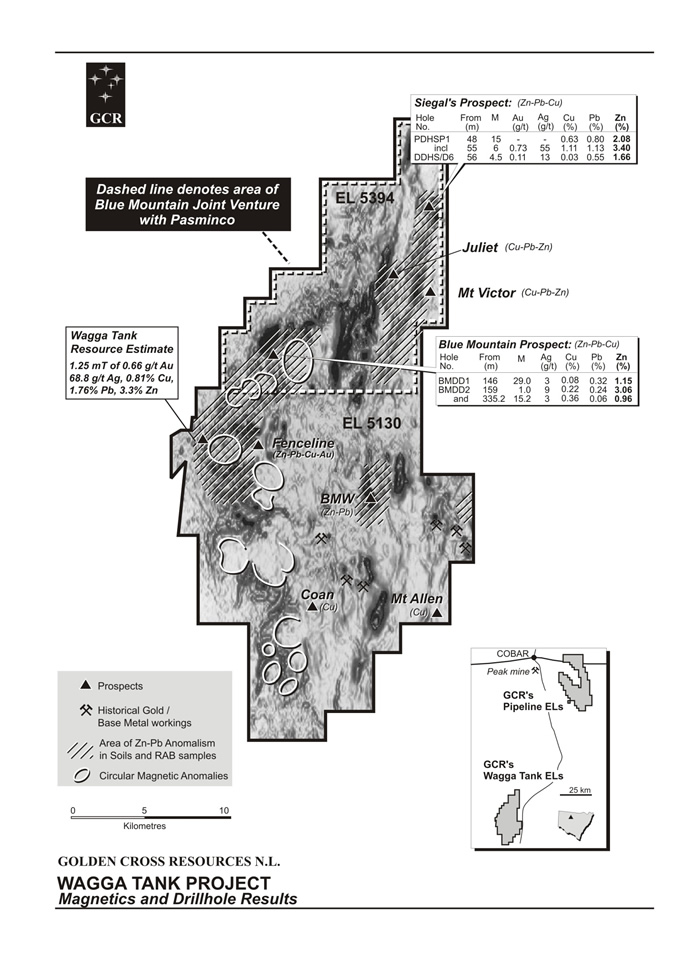 GCR followed up this work with extensive geochemical sampling of soils using a Partial Leach technique. This data suggested that not only did the known mineralisation occur peripheral to these structures, but that a geochemical zonation occurred from the centre to the periphery of these. Generally soils in the centre were copper-enriched whilst on the margins they were lead-zinc enriched. This style of zonation is similar to intrusive porphyry-like geochemical halos.

This led GCR to speculate that mineralisation previously encountered was related to intrusive centres and/or cryptodome volcanic complexes perhaps associated with caldera collapse during volcanic activity.

In 1999, Pasminco farmed into the property with initial focus on the Blue Mountain Prospect where a large (3 km2) lead anomaly was discovered by RAB drilling. Drill results were generally disappointing, however it was noted that lead-zinc sulphides associated with pyrrhotite occurred within an intrusive feldspar porphyry dyke. This was generally supportive of the intrusion related paradigm of base metal mineral deposition.

Pasminco then undertook drilling campaigns on the BMW and Siegals Prospects. It is the Siegals prospect in particular which has created significant interest. In a final phase of exploration before the company withdrew from the farm-in agreement, a diamond drill hole targeting a magnetic anomaly intersected two narrow zones of high-grade gold and copper mineralisation. Hole PSDD1 returned 1m at 10.7 g/t gold and 1.18% copper from 79m, and 1m at 7.8 g/t gold from 87m. 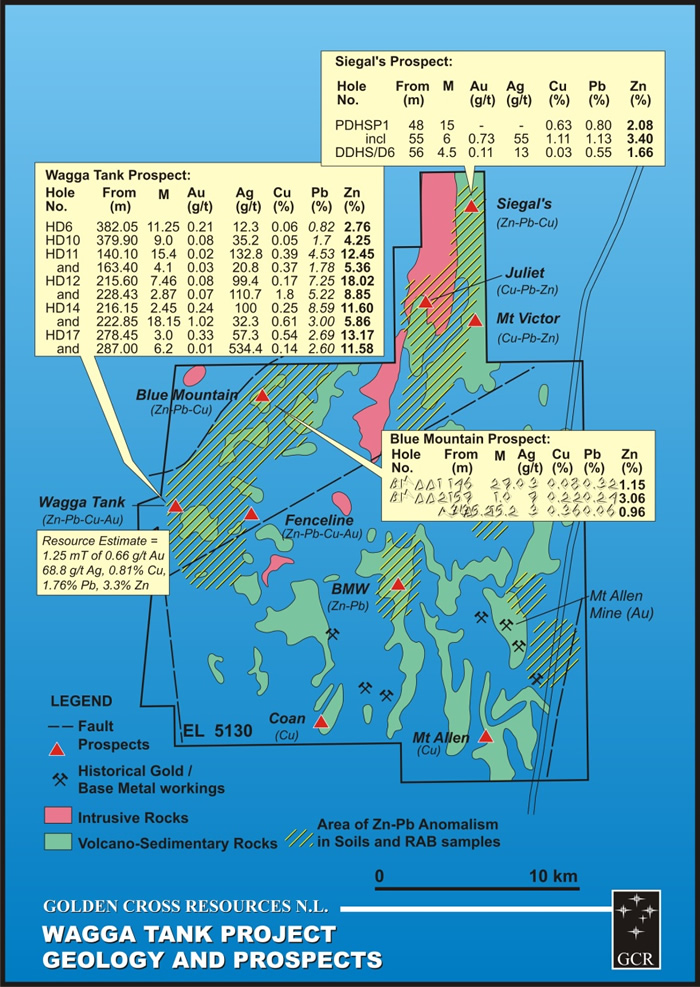 These intersections are regarded as significant because they occur within an altered, sulphide-bearing, high-level, intrusion. In the past, mineralisation in this area was considered to be volcanic-hosted massive sulphide-style, occurring along depositional contacts between sedimentary and volcanic rocks. The diamond core from PSDD1 suggests that sulphide mineralisation is genetically related to, and hosted within intrusive rocks, inviting comparisons with the rhyolite-related Peak Gold Mine south of Cobar.

Pasminco withdrew from the agreement in 2003. GCR decided to focus attention on the eastern side of the tenement, in order to assess the gold potential of the Siegals and Mt Allen Gold Mine prospects. 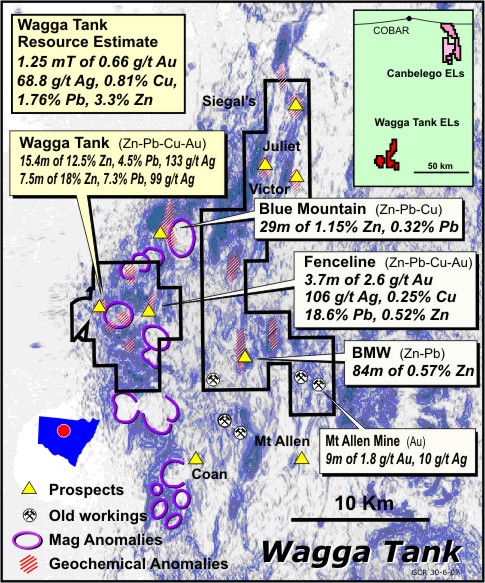 A PQ/HQ core hole, BMW-0006 was drilled by Techdrill Services Pty Ltd (Orange) with a UDR650 drill rig, to test an off-hole EM response in BMW-0004A (refer to section 7.4.1). The EM response was interpreted to indicate a pyrrhotite- or chalcopyrite-rich zone. BMW-0006 was completed in mid-July 2011, immediately prior to the onset of heavy winter and spring rain.

BMW Anomaly appears to be an unfocussed, zinc/lead-rich hydrothermal system. No vectors to increased chalcopyrite are evident in BMW-0004A nor BMW-0006, so the copper prospectivity of BMW Anomaly is downgraded to the point where no further work is planned by MMG.

MMG undertook a detailed structural mapping exercise over the main hill at BMW Anomaly and the immediate environs. The objective was to provide data to assist with design of a follow-up (scissor) hole to BMW-0004A. The mapping verified the existence of a regional-scale syncline that runs down the lower eastern edge of the main hill at BMW Anomaly and plunges south ~45 degrees. Three cleavages have been recognized.

Sulphide-bearing zones on the surface were also mapped, some of which were preserved by a silicified zone and therefore readily identifiable (as pyrite and pyrrhotite). A second regional syncline is evident on a hillock to the west of the main ridge at BMW, with a low-lying area of no outcrop probably representing the anticlinal hinge zone. The hinge zone probably contains a fault.

Further mapping revealed that in addition to the syncline hinge there is a significant fault running along the far eastern edge of the main hill. The fault was first discovered through stratigraphic inconsistencies in the field and was verified by identification of high strain zones pressure (including s and c fabrics) and quartz blow along its length.

Geophysical data (particularly TMI and gravity) also verified the existence of the fault. The fault is somewhat irregular in form (it is probably composed of multiple smaller shears) but in general runs N-S (parallel to S2) and has been gently folded by F3 in the north. Stratigraphic relationships indicate significant dextral strike-slip movement, though there may be a dip-slip component as well.

A DHEM survey was conducted on BMW-0006 (blocked at 425 m) by Outer-Rim Exploration Services in October 2010, confirming that BMW-0006 had intersected the southeastern edge of a unique model solution for the off-hole EM response in BMW-0004A. The EM response is considered to be wholly due to pyrrhotite.

The survey was flown on a nominal 200 m line spacing over two survey blocks – a departure from the original single block survey.

Given the success obtained, at depth, at the nearby Mallee Bull project and the success obtained with EM techniques in the region, it is hoped MMG will accelerate its efforts at Wagga Tank. Clearly there is much work, drilling and down-hole EM to be done here. 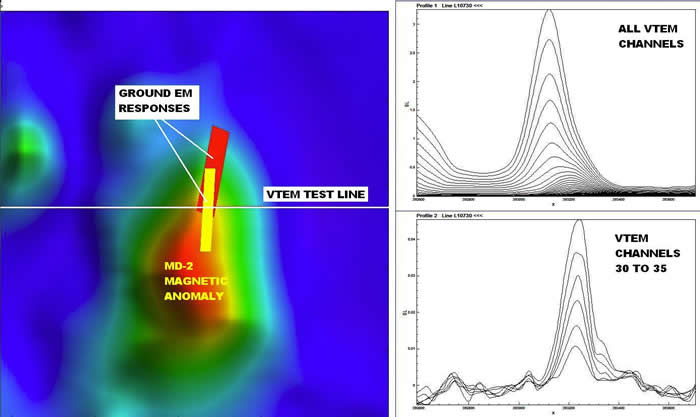