Sunny Corner –  a lead-zinc-silver mine 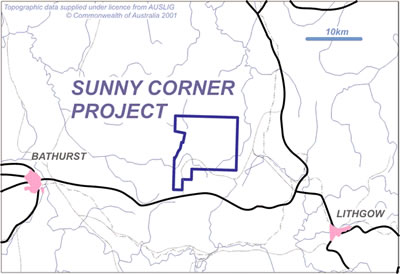 The Sunny Corner Tenements cover an area of approximately 200.1 square kilometres around the village of Sunny Corner located about 6 kilometres north of the Great Western Highway, between Lithgow and Bathurst in New South Wales.

Argent now holds a 51% interest in the Sunny Corner tenements and may earn a further 19% interest, to take its interest to 70% through the expenditure of an additional $168,000 by July 2013.

The GCR campaign comprised 49 RC holes for a total of 4090 metres drilled beneath and adjacent to the historical Sunny Corner silver mine which is reported to have produced 210,000 tons @ 13.8 ounces of silver per ton for 2.9 million ounces of silver between 1881 and 1893. 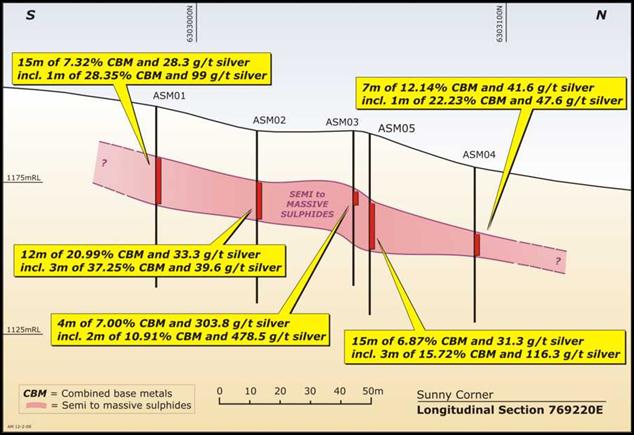 The deposit is clearly a Volcanogenic Massive Sulphide (VMS) style and lies between 12 and 30 metres from the surface making it likely to be amenable to open pit mining. The mineralization comprises fresh, massive pyrite with sphalerite, galena and chalcopyrite hosted by silicified siltstones with rhyolites in the footwall. Whilst meeting the criteria for VMS classification, which often include extensive stockwork mineralisation, Sunny Corner also has potential for structurally controlled base metal sulphide mineralisation.

In December 2008  a programme of 5 diamond holes were drilled to obtain samples for metallurgical testing and density calculations. Assay results were released on 1 April 2009 click here to view the ASX announcement “Assay results for Sunny Corner Metallurgical Holes“.

In March 2009 Argent drilled five diamond holes at Sunny Corner to obtain samples for metallurgical (flotation) testing. Testing has now been completed and the results indicate that recovery of over 97% of contained base and precious metals was readily achieved to a 30% by weight bulk concentrate grading 20.5% Zn, 8.8% Pb, 2.3% Cu, and 180g/t Ag. Attempts, including fine grinding to 6 microns, were unsuccessful in achieving saleable zinc, copper or lead concentrates with acceptable recoveries. The company will now seek markets for the bulk concentrate and will investigate alternative means, including hydrometallurgical, to liberate the individual metals.

A review of previous drilling at Sunny Corner was undertaken by VMS expert Mr Rod Sainty who concluded that the ore horizon was open to the north and west and recommended further drilling.  Argent will re-visit this recommendation should future metallurgical test-work prove encouraging. 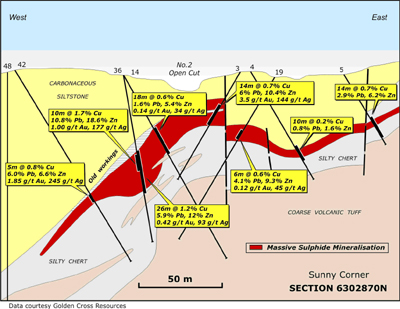 Modern mineral exploration has focused on the very high grade massive sulphides historically mined at Sunny Corner, where initially gold (12,000 ounces), then silver were extracted, with copper, lead and zinc largely going to waste at grades of up to 30% combined metal.

A total of 250,000 tonnes of sulphide ore was originally mined to produce approximately 3.5 million ounces of silver. Gold grades in the massive sulphide were reported to be in the order of 4.5 g/t.

Most previous explorers have considered the old Sunny Corner Mine mineralisation represents ancient volcanic-hosted massive sulphide (VHMS) deposited on the seafloor some 420 million years ago. Mineralisation was thought to be deposited at the interface between volcanic and sedimentary rocks. GCR does not discount this theory, however geological evidence suggests that the old mine is hosted in a very large zone of crustal deformation and that faults within this zone exert considerable control on the distribution of ore minerals. GCR’s focus on structural controls on mineralisation opens up many more opportunities for discovery of new mineralised zones compared to the stratigraphic (VHMS) model previously considered. 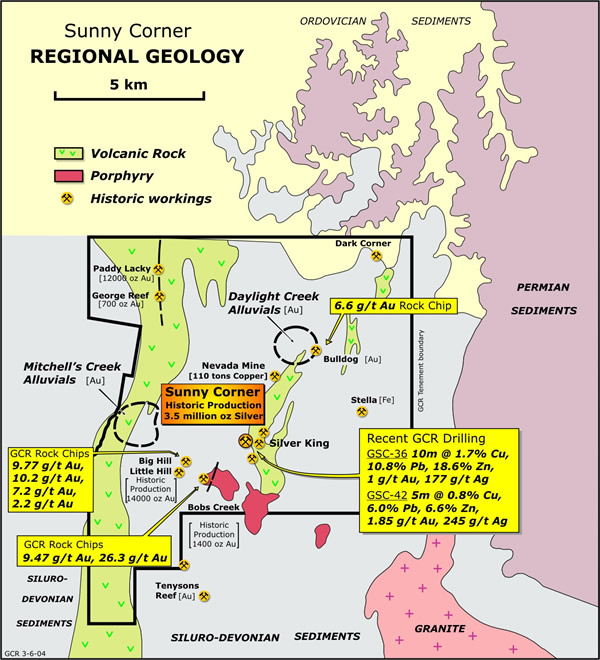 GCR first became involved in Sunny Corner when it acquired the Licence from Michelago Resources in 2000. Some considerable time was spent consolidating tenure (which included old mining leases) into a new Exploration Licence (EL 5964) which was granted in August 2002. The drought and high fire risk in the area prevented all but reconnaissance work until about April 2003. Since that time GCR has conducted intensive geochemical sampling and geological mapping culminating in drilling in September 2003.

Sunny Corner lies within the Sunny Corner Synclinorium which occurs in the northern part of the Captains Flat – Goulburn Synclinorial zone in the eastern Lachlan Fold Belt. The area comprises a sequence of deformed and metamorphosed Silurian to Middle Devonian sedimentary and volcanic rocks that were intruded by Middle to Late Devonian granites.

The mineral deposits at Sunny Corner are hosted in a sequence of Siluro-Devonian rocks and later felsic porphyries, probably of Permo-Carboniferous age. The Siluro-Devonian comprises a basal conglomerate, overlain by felsic volcanic and volcaniclastic rock and siltstones. Sunny Corner is located on a parasitic anticline on the southwestern margin of a broad dome-like structure. Strong NW-SE structural trends are evident and appear to control emplacement of intrusive rocks. Whilst original interpretations indicate a volcanic-hosted massive sulphide setting for the historic Sunny Corner Mine, there is also geological evidence to suggest that mineralisation may be associated strong deformation and the emplacement of the younger intrusive rocks.

In August 2004, RC drilling was carried out at the Bobs Creek, Little Hill and Big Hill areas 1-2 km southwest of the main Sunny Corner village. Historically, a combined production of 15,000 ounces of gold was recorded from gold bearing quartz veins. GCR geologists have noted the presence of finely stockworked quartz veining within hydrothermally altered sedimentary rocks (Big Hill, Little Hill) and porphyritic intrusive rocks (Bobs Creek). At all three prospects, the mineralisation occurs either at the surface or close to surface.

Geological work by GCR geologists indicates that the old Sunny Corner Mine is hosted in a broad (600m wide) corridor of intense faulting and alteration which extends in a north-south orientation for in excess of 3.5km. This faulting occurs coincidentally with the north trending contact between fine sedimentary rocks and felsic volcanic rock and dip westward. Sulphide minerals rich in copper, lead, zinc (base-metals) arsenic, gold and silver occur in both types of rock in fault zones and in bedding parallel structures.

In the past, GCR undertook extensive rock chip and soil sampling to determine the distribution of both base-metals and precious metals (gold and silver). Soil samples delineated a strong gold-silver-lead anomaly 1500m long and 100m to 200m wide. Within that zone, numerous anomalous rock chip samples have been collected. In places, continuous rock chip samples were collected from outcrops over intervals of between 1m – 4m. Weighted average composites were calculated up to sample widths of 14m. Significant results are tabulated below. 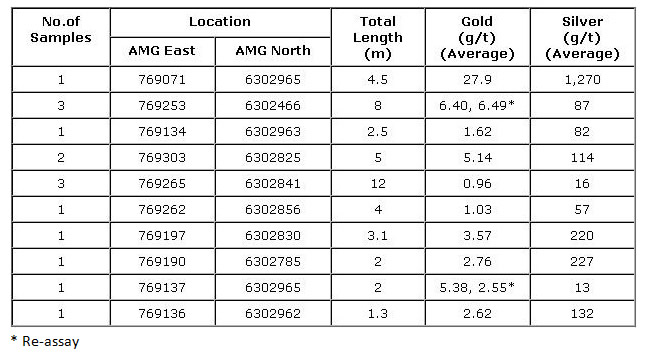 Best results were returned from breccias that outcrop beneath exposed ore zones in the old open cut mine, and from silicified shear zones that crosscut ore horizons. The latter were previously identified by GCR as potential hosts to gold and silver mineralisation. Broad widths of lower grade mineralisation were also encountered surrounding high grade zones.

Results from the remainder of the holes confirm the presence of a specific mineralised horizon to the east of hole 42 and enhance the geological understanding of the area. 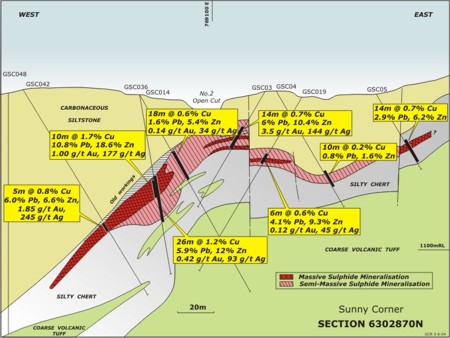 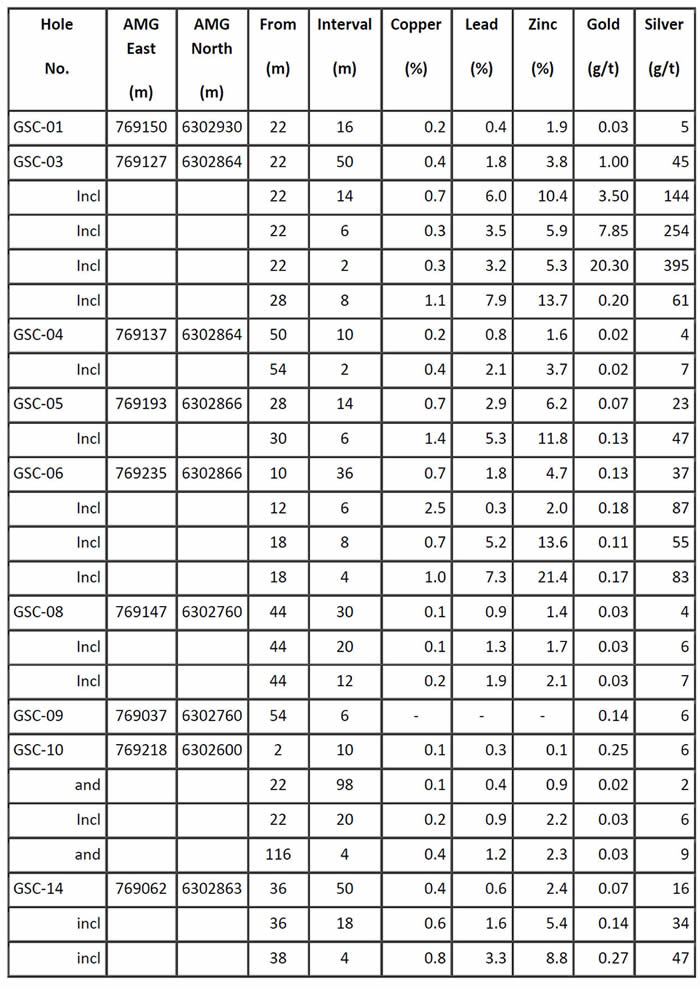 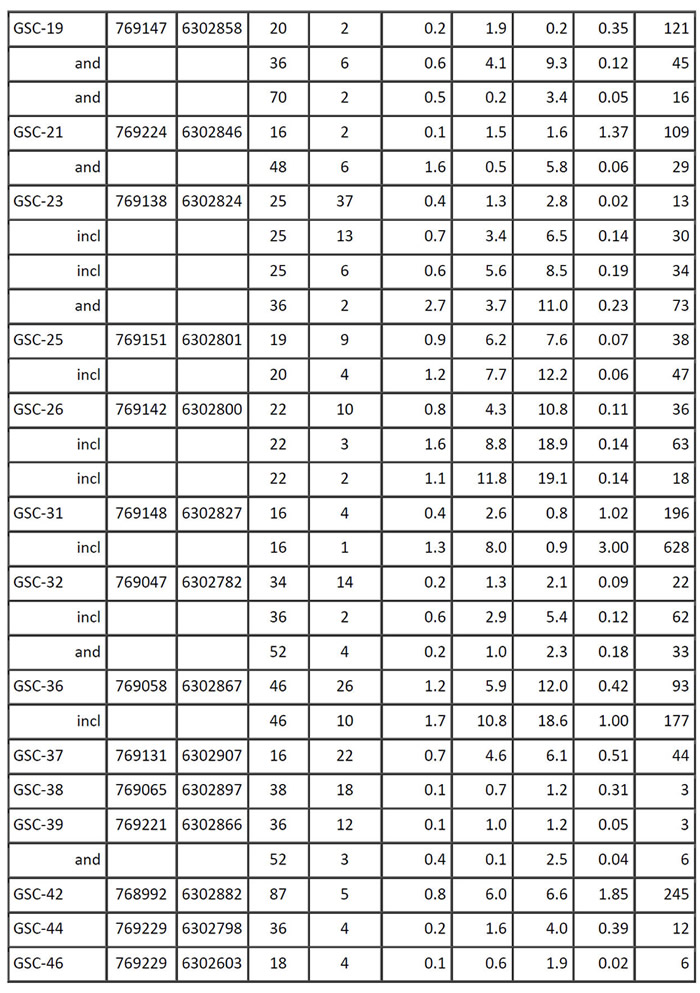