Golden Cross holds five tenements within the northern Gawler Craton and one in the central Gawler in South Australia. The tenements lie within several structural domains lying north of the highly prospective Olympic Domain, which hosts the world-class iron-oxide-copper-gold-(uranium) [IOCG-U] deposits of Olympic Dam and Carrapateena. The Mount Woods Inlier contains the Prominent Hill mine and two of GCR’s EL’s, Warriner Creek and Codna Hill.

Gawler Craton IOCG deposits are characterised by extensive hematite-magnetite (iron) alteration and brecciation, and typically comprise disseminated chalcopyrite, chalcocite and bornite copper mineralisation with associated gold. Additionally, the deposits often include uranium and rare earth elements (REEs). Figure 1 shows the locations of Golden Cross tenements and geophysical targets within them, as well as mines and prospects in the region shown by commodity.

Located within basement granites and volcanic rocks, these deposits are typically covered by several hundred metres of sedimentary sequences and consequently exploration techniques for this style of deposit are predominantly geophysical. Discrete magnetic and/or gravity anomalies have been identified within each of the Golden Cross tenements, and these will be targeted for further exploration including geophysical modelling and detailed ground geophysical (gravity and magnetic) surveys prior to drilling.

Golden Cross has been awarded a $75,000 drilling grant by the South Australian Department of Manufacturing, Innovation, Trade, Resources and Energy [DMITRE] as part of an exploration drilling funding program known as the PACE Discovery Drilling initiative. It will see co-operative drilling of six of the priority geophysical targets, and additional work is now being undertaken to finalise access arrangements, so that drilling may commence as soon as practical. 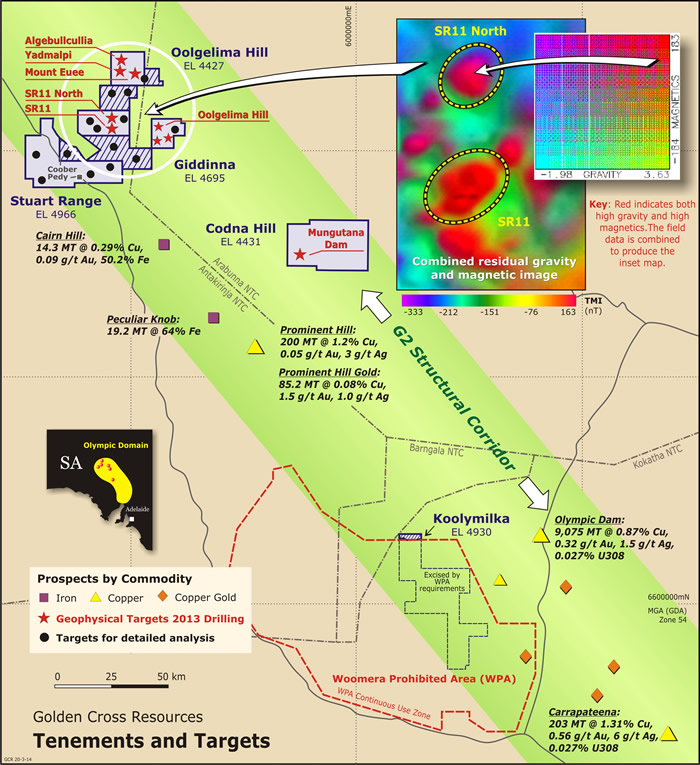 The tenements are located within the Mabel Creek Ridge, Coober Pedy Ridge and the Mount Woods Inlier domains in the north of the Gawler Craton. The Mount Woods Inlier hosts the Prominent Hill copper-gold ore body which is located to the southeast within the G2 Structural Corridor. Current reported total mineral resources there are:

The Mt Woods Inlier is a region of shallow Palaeoproterozoic and Mesoproterozoic basement rocks, although exposure is very limited. It underwent the same thermal and mineralising events that affected the Olympic Domain of the Gawler Craton, and IOCG-style alteration is widespread. The Prominent Hill deposit occurs on the southern margin of the Mt Woods Inlier.

Rock types comprise high grade Palaeoproteroizoic metasedimentary rocks intruded by syn- to post-tectonic granitoids. The metasediments are characterised by an intense magnetic response in regional aeromagnetic data, which reflects a combination of magnetite-rich precursor sediments including BIFs, magnetite alteration and probably mafic intrusive bodies. The inlier is bound by major shear zones, the most prominent of which is the east-west Karari Fault Zone marking the break with the Coober Pedy Ridge and Mabel Creek Ridge to the north. These two domains have not been explored to the same extent as those to the south but are known to contain critical elements such as Hiltaba associated granitoids and mafic intrusives.

An infill gravity survey was undertaken over select parts of EL 4427 Oolgelima and defined new magnetic/gravity targets adding to the five previous targets. Of particular interest is the exciting new drill target Anomaly SR11, which has a 1 mgal gravity intensity, and a footprint of 1.8 x 1.4 km with the long axis trending SW-NE, coincident with a pronounced magnetic anomaly as shown in Figures 2 and 3. A second gravity/magnetic anomaly lies just north of SR11, and both meet the criteria for defining IOCG-type mineralisation at depth. 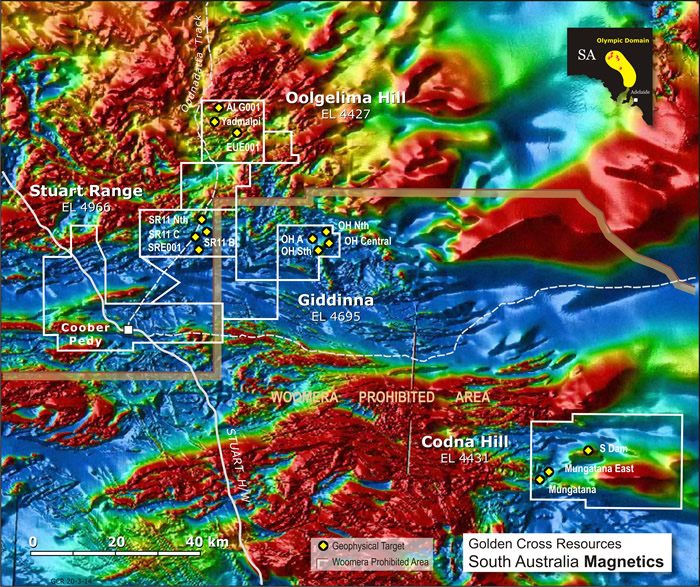 This newly granted EL 4496 is centred on the township of Coober Pedy, and targets have yet to be defined by ground magnetic and gravity surveys. These will be matched with favourable structural locations identified from recent GCR-sponsored studies using regional airborne magnetic and government gravity data.

The Koolymilka tenement application (ELA 2009/135) occurs 30km west of Olympic Dam Mine, in the northwestern section of the Olympic structural and mineralisation domains. The basement rocks include the Hiltaba Suite Granites and Gawler Range Volcanics that have been proposed as the source for copper-gold mineralisation in the province as well as providing the heat source to generate fluid flow, resulting in the extensive alteration events associated with IOCG-U mineralisation. The tenement occurs on the margins of the Andamooka Dome (an area of comparatively elevated basement topography), which hosts the Carrapateena deposit. Koolymilka has shrunk considerably with over 90% of its area excised by the Woomera Prohibited Area.