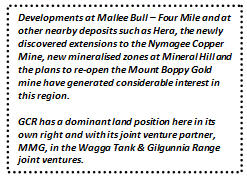 The Rast Group of tenements covers the eastern margin of the Rast Trough in the southern Cobar Basin. It includes the following tenements:

This part of the Cobar Basin is relatively under-explored in comparison to other areas in the Cobar district and is considered to be prospective for Cobar-style gold-base metal deposits. The margins of the Rast Trough hold potential for Cobar-style deposits that may have developed in favourable structural-stratigraphic settings. 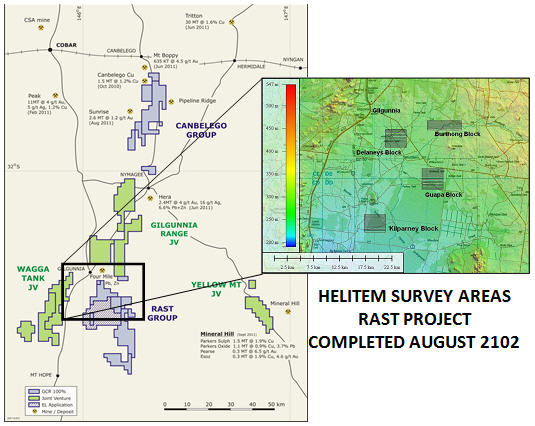 Burthong Creek (EL7485) is located in central NSW, about 45 km SSW of the town of Nymagee, and covers an area approximately 9km2. It is part of a larger tenement package (the Rast Group) acquired by Golden Cross to cover the eastern margin of the Rast Trough in the southern Cobar Basin.

The exploration targets for Burthong Creek include a series of magnetic anomalies that are located on or adjacent to the prospective contact positions between the Burthong Formation and Shume Formation sediments.

Golden Cross has been conducting data reviews including evaluation of regional geophysical data with a view to including EL7485 in future airborne EM work planned over adjoining tenements. This work will assist in delineating target areas for future exploration. 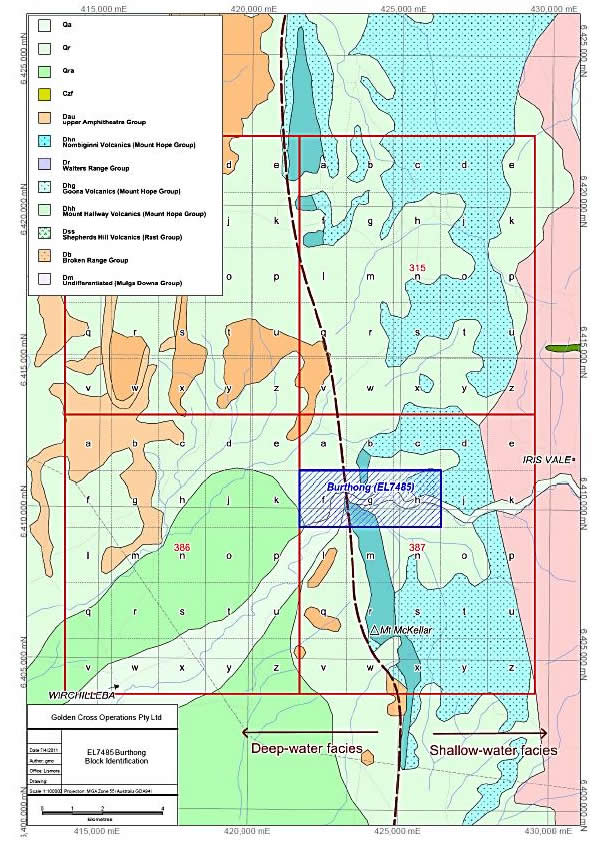 The Delaneys Tank (EL7322) tenement is located approximately 4km southeast of the locality of Gilgunnia (Figure 3).

The exploration targets for EL7322 Cobar-style gold-base metal deposits, inferred to be situated where structures related to the Mount Hope Lineament (red dashed line in Figure 5) intersect the dominant cleavage (approximately northerly striking) and at favourable sites near the prospective stratigraphic contact position between the Burthong Formation and the Roset Sandstone. 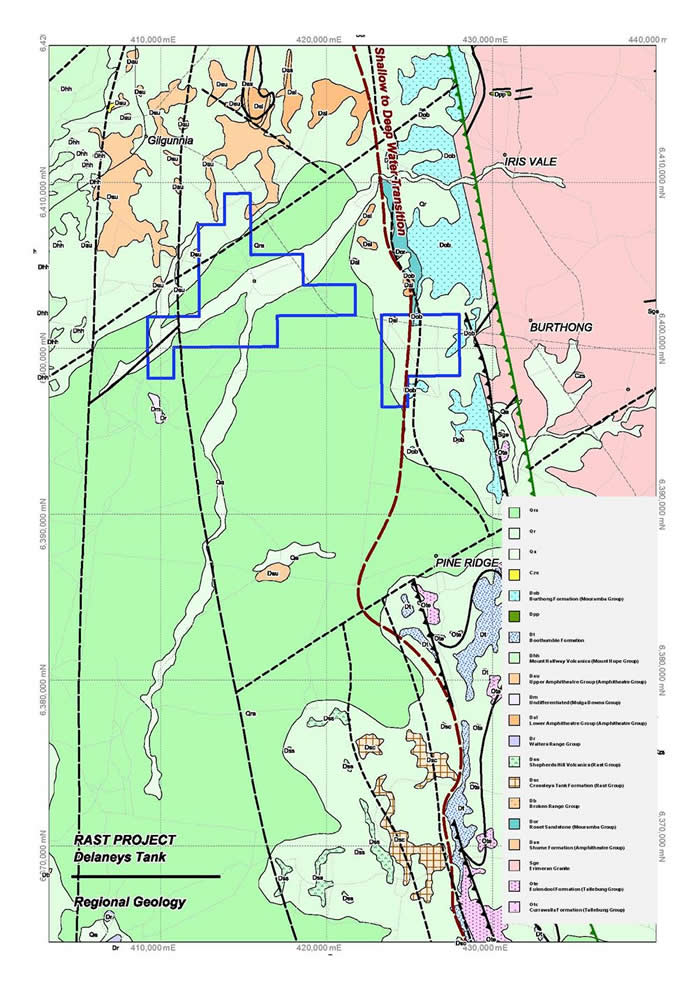 Four Mile South (ELA4865) is part of the Rast Group, and the application was lodged to facilitate a refocus of exploration following the discovery of lead, zinc and copper mineralisation 4km north at Mallee Bull. This discovery has been attributed to an airborne EM anomaly and subsequent downhole EM survey.

GCR has just completed a 300 line-kilometre HeliTEM survey flown by Fugro Airborne Surveys., ELA4385 accounts for 13.5 line-km of the proposed survey. Interpreted conductivity targets are to be followed up by surface geochemical sampling and/or aircore drilling in conjunction with adjoining tenements. 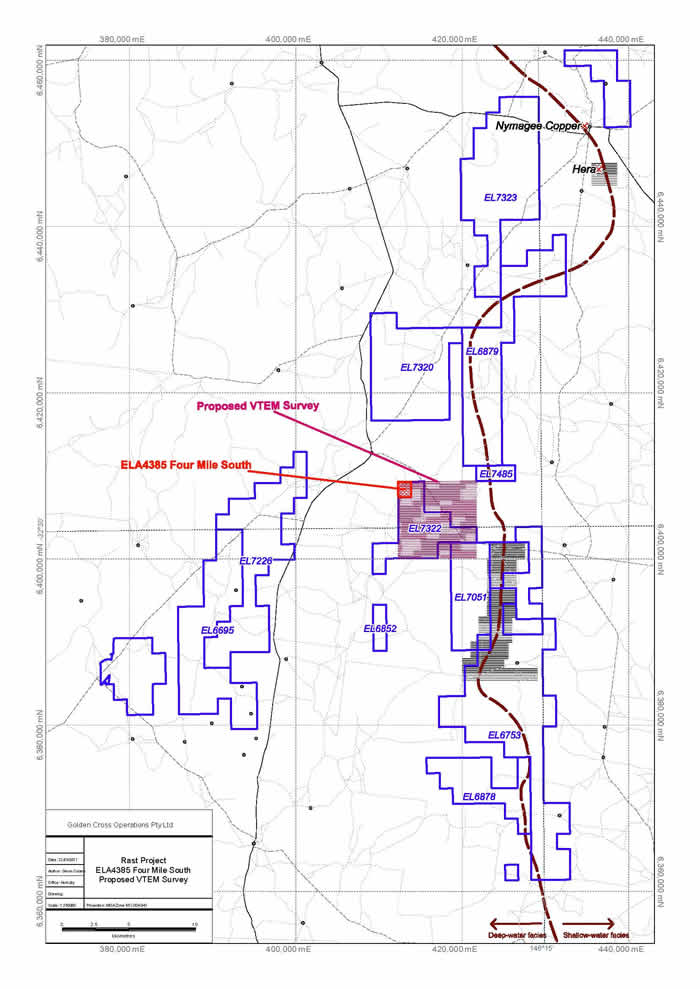 Guapa Tank (EL7051) is located about 48 km southwest of the town of Nymagee. There is a favourable structural setting for base metal deposits separating the deep water sediments (Lower Ampitheatre Group) in the west from the shallow water sediments (Burthong Formation/Roset Sandstone) in the east (Figure 5). It is shown as a north-south dashed black line in Figure 7.

Interpretation of magnetic signatures confirmed that the palaeochannels generally have strongly magnetic, dendritic patterns that reflect maghemite content, and are shown as black caterpillar tracks in Figure 6 on an image of reduced-to-the-pole airborne magnetic data.

A 25 hole aircore drilling program, completed in November 2009, included 6 aircore holes (RSTFE 037-042) totalling 512m in the Guapa Tank tenement. Drillhole locations are shown in Figure 6 below. The drilling primarily targeted palaeochannel iron [maghemite], but also extended into channel basement and sides to test for signs of gold and base metal anomalism. 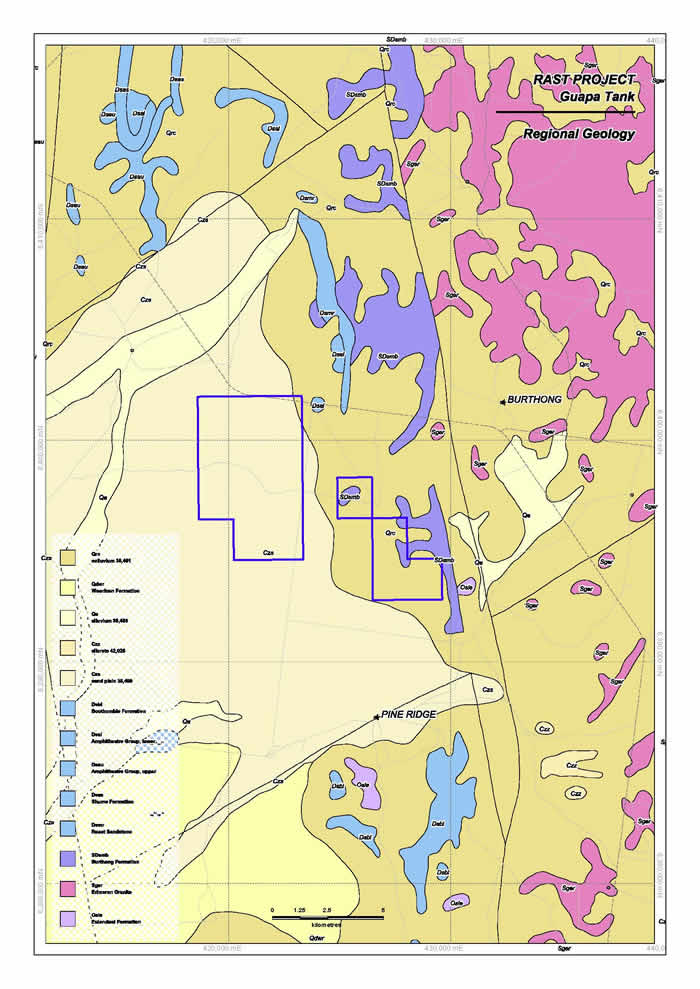 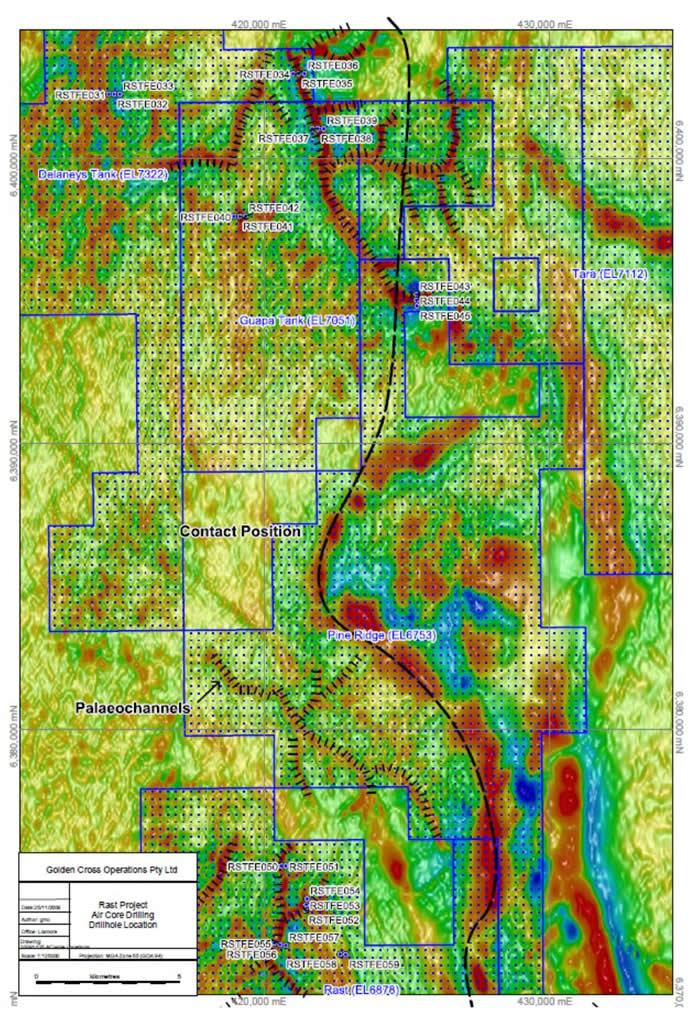 Assay results showed the ferruginous palaeochannels are typically up to 18m thick using Fe5.0% with average grades generally less than 12% Fe. Peak iron value was 15.1% Fe in RSTFE 041. Many holes returned up to 21m thick intervals of weakly elevated [+5ppb] Au, peaking in hole RSTFE39 at 24ppb, but in other holes in the program at 83ppb.The gold zones are accompanied by weakly elevated zinc values [+100ppm, peaking at 211ppm], and cobalt [+100ppm, peaking at 151ppm]. The significance of these results in relation to other criteria is being evaluated.

In January 2010, Geotech Ltd flew a VTEM airborne EM survey totalling 385 line-kilometres over the prospective base metal target horizon, which runs between the two non-contiguous blocks of EL7051. The survey results are being interpreted and analysed, with the aim of identifying drill targets in attractive geological structural and/or stratigraphic settings.

Kilparney (EL6852) is located 22km southeast of Gilgunnia and 65km southwest of Nymagee (Figure 1). The tenement was acquired to explore a discrete magnetic high (Figure 7).  The geological setting at Kilparney shows similarities with that at the Mt Allen-Double Peak prospects located some 20km further southwest. At Mt Allen, Au + W + Bi + Cu + Ag mineralization is associated with massive magnetite-hematite bodies and magnetite-pyrite bearing siltstones at the contact with volcanics. Alteration includes silica, carbonate, and pervasive chloritisation. 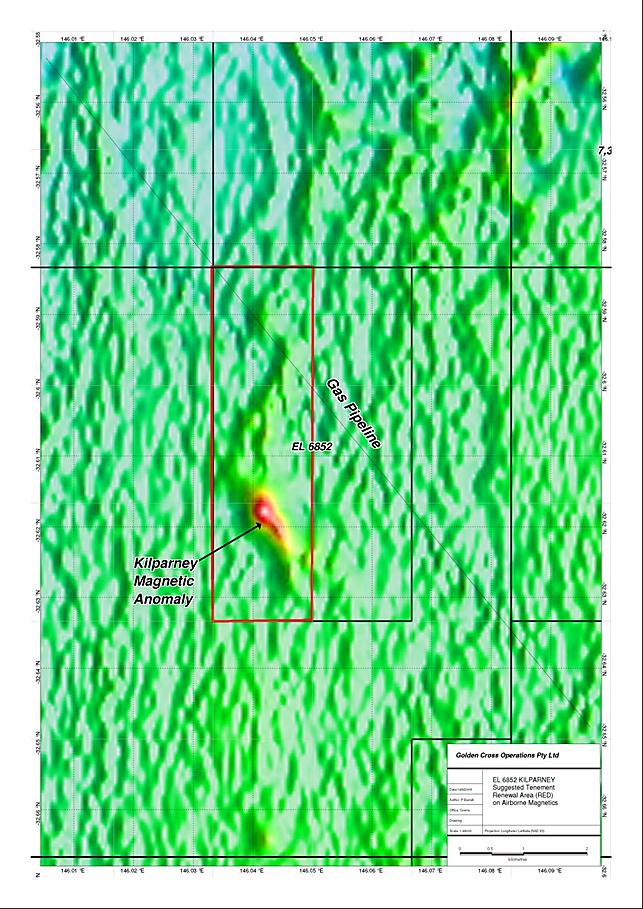 Reconnaisance reverse circulation aircore drilling at EL6753 in the year to April 2011, consisted of three holes (RASTFE 043-045) for a total of 257m, undertaken in a traverse of 200m spaced vertical holes. The drilling was completed as part of a program over all the Rast Group tenements targeting prominent magnetic palaeochannel networks and underlying basement rocks. 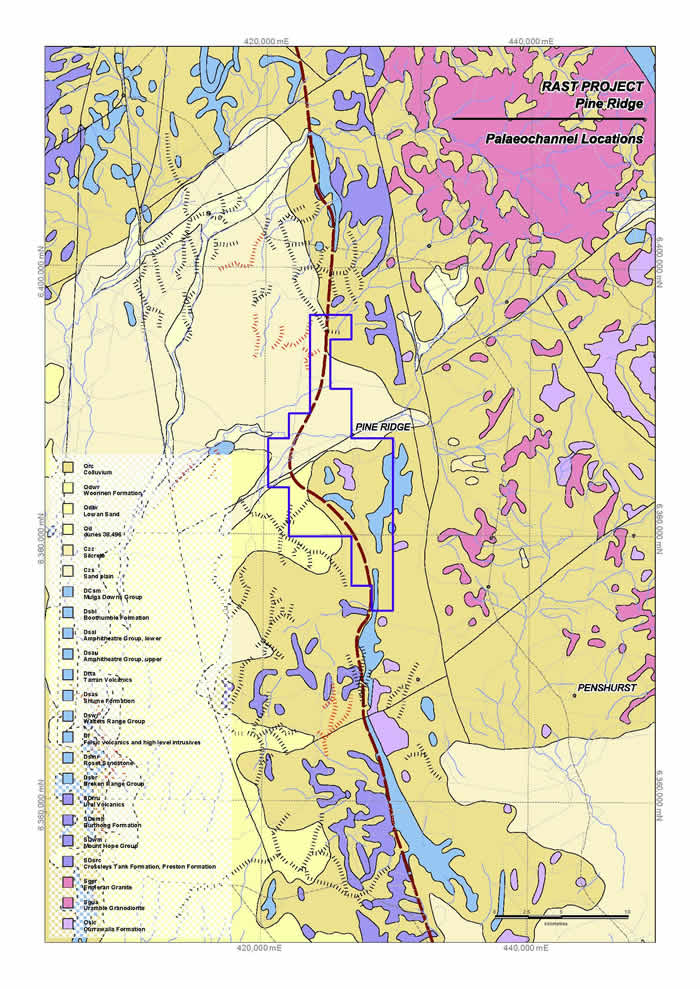 Vegetation sampling targeted the C3 magnetic anomaly, and analysis for gold was comparable with the downhole values in aircore drilling, with a maximum value of 3.4 ppb Au within a +1ppb zone. Further infill sampling and evaluation is required to explore this result.

In 2010, Geotech Ltd flew a block totalling 385 line-kilometre VTEM survey at 200m line spacing over the interpreted prospective base metal target horizon which runs through the Rast Group of tenements. The survey extended from the adjoining eastern block of EL7322 Delaneys Tank, southwards along strike into EL6753 Pine Ridge with minor overlap on the western side into the west block of EL7051 Guapa Tank. The results are being analysed to identify potential drill targets.

Rast (EL6878) is located approximately 300km west of Sydney, between the towns of Nymagee, Euabalong West and Mount Hope (Figure 1).

Prospective stratigraphic locations within EL6878 include:

The exploration targets are Cobar-style gold-base metal deposits, located on or adjacent to the prospective contact positions between the Boothumble Formation, Crossleys Tank Formation sediments and the Ural Volcanics.

The licence area is also considered prospective for channel iron ore deposits in the abundant shallow magnetic palaeodrainage networks. From 2008-2010, Golden Cross completed reverse circulation drilling of a magnetic anomaly, and also a program of aircore drilling to evaluate the magnetic palaeochannels. 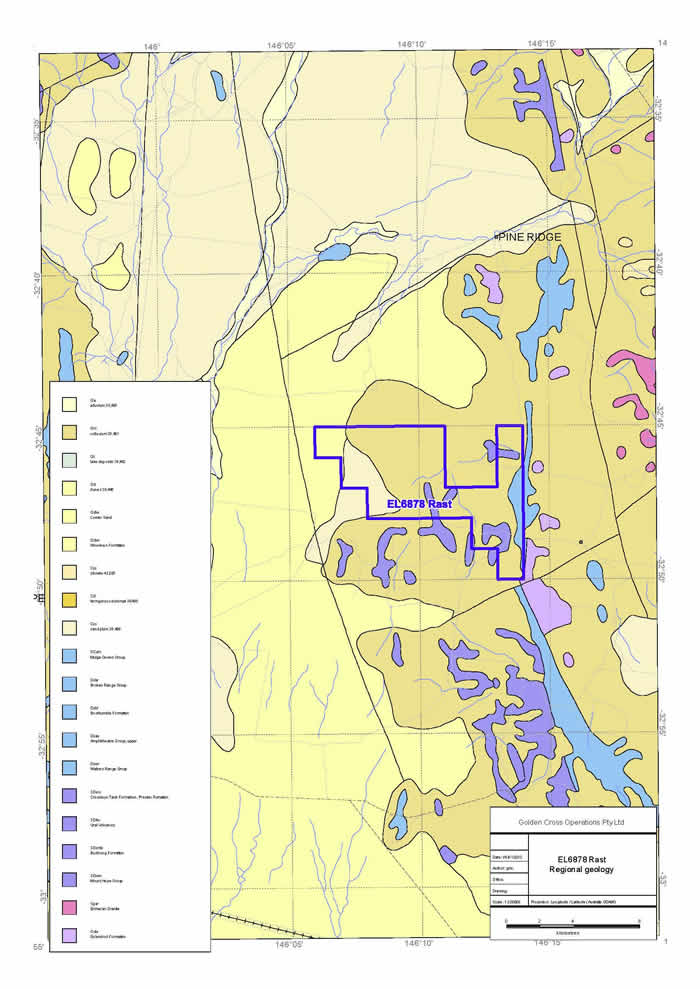