The Quidong Basin is host to strata-bound, carbonate-hosted base metal-gold mineralisation, and associated structurally controlled copper vein mineralisation. The Basin is also prospective for a variety of other mineralisation styles including intrusion-related gold, volcanic-associated and remobilised base metal sulphide deposits. To date only near surface and outcropping mineralisation has been tested by drilling, with encouraging results. Consequently the potential for discovery of a significant gold or base metal deposit remains high.

Golden Cross Resources’ Exploration Licence Application 4514, at Quidong, is in the southern Lachlan Orogen approximately 20km west of the township of Bombala in far south-eastern NSW. 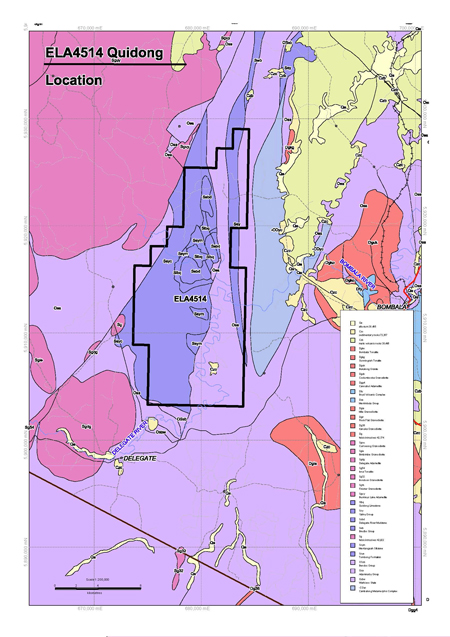 ELA 4514 covers the Quidong Basin – a fault-bounded, synclinal outlier of Silurian marine sediments within Late Ordovician sandstones and phyllites. The basin covers an area of about 25 square kilometres and contains Late Silurian shallow-marine sediments unconformably overlying Early Silurian deep marine sediments. The stratigraphic sequence within the basin is as follows:

Additionally, the Silurian sedimentary sequence is cut by intermediate porphyry intrusions which have altered the adjacent country rocks, notably limestones, to skarn. The porphyry is strongly veined and pyritised, and may represent a late sub-volcanic intrusive event. 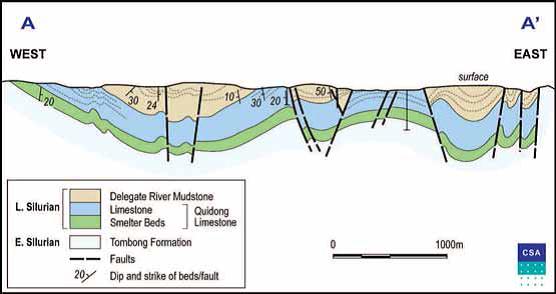 The potential of the Quidong Basin to host concealed strata bound base metal mineralisation remains high, and is indicated by both numerous zones of geochemical anomalism around the basin margin and mineralisation along cross-structures within the basin. The western margins of the basin have additional potential for associated gold mineralisation, from the Belmore workings, north through Adams Zone to the “Pine Hill” Zone.

The basin developed with the deposition of quartz greywacke and shales of the Early Silurian Tombong Beds followed by deposition of the Late Silurian Quidong Limestone containing:

Outcropping lead-barite and lead-zinc deposits have been mined from basin-bounding faults and within the outcropping Smelter Beds around the basin margin. Limestone-hosted gold occurrences have been identified and drilled to shallow depths. The Smelter Beds, which host apparently conformable layers of lead-zinc mineralisation, have only been tested by drilling on the basin margins, except in a small, shallow zone in the southeast quadrant known as Clarke’s Reef, and in minor holes elsewhere on the basin margins.

Copper mineralisation, high in the sequence within the upper Quidong Limestone and within the Delegate River Mudstone in the central basin, occurs as near-vertical pipes filling fracture plane intersections. This mineralisation is interpreted to have been sourced from either basin-derived fluids during dewatering and/or hydrothermal fluids driven off intrusions beneath the basin.

North of the Delegate River, at the Adams Zone, gold occurs in limestone-hosted pyritic pods yielding up to 41.9g/t Au from outcrop sampling within a 10m x 500m+ NE-SW trending siliceous-gossanous structure in the central NW section of the basin. Shallow trenching across strike yielded a best result of 7.95m @ 6.7g/t Au. This zone has been drill tested to depths of about 50m over a strike length of 300-400m by Delta Gold, yielding patchy, low-grade intercepts (3m @ 1.08g/t Au). Considerable gold potential remains at depth and along strike.

Figure 3. Type outcrop of the Quidong Limestone on the north side of the Delegate River

Mineralisation in the area was first noted in the 1852 by Rev. W.B. Clarke, and in 1868 the Belmore Freehold Silver and Lead Mining Company issued a prospectus for further work. Numerous historic shafts and workings are dotted around the basin, the most significant being at Clarkes Reef and the Central Copper Workings.

Clarke’s Reef: Diamond drilling at the Clarke’s Reef Prospect has defined a zinc-lead sulphide zone within the Smelter Beds. The best drill holes to date are CRD-1, QDH-1 and QDH-3 which intersected base-metal mineralisation over thicknesses of:

Outside the immediate Clarke’s Reef and Belmore Copper Mine areas, the Smelter Beds sequence (which hosts the strata bound Zn-Pb mineralisation) remains poorly tested, especially in the central parts of the basin.

Small, fault-hosted Pb-Ba, Cu and Zn-Pb deposits have been mined from basin-bounding faults and from faults within the basin.  Copper mineralisation in the Central Copper Workings, which occurs as near-vertical pipes filling intersections of fracture planes, has also been the focus of small scale workings and limited drill-testing.

A ground magnetic survey was completed over the Clarke’s Reef area by Surtec Geosurveys Pty Ltd. An obvious correlation exists between the very quiet magnetic signature over the quartzite Tombong Beds, compared to the younger Late Silurian sediments. Two intense magnetic highs are present over the intrusive porphyry. Many of the other magnetic highs may be caused by the presence of magnetic oxides in ferricrete developed within thin layers of Tertiary gravel.

Silicified limestone-hosted/fault-hosted gold occurrences were identified and drilled by Delta Gold to shallow depths at the Adam’s Zone in the central northwest section of the basin.  Gold occurs in pyritic pods yielding up to 41.9 g/t Au, scattered irregularly along a 600 metre long NE-trending structure.  Trenching across one zone yielded 7.95m @ 6.7 g/t Au.  The zone has been inadequately drill-tested to depths of up to 80m over a strike length of 300-400m, with a best intercept of 3m @ 1.08 g/t Au. Previous drilling in this area by Cyprus was assayed only for zinc.  Potential remains at depth and along strike.

Drilling of four holes (QPH 1-4) along an 80m strike length at the north-eastern end of Adams Zone, and two drill holes (QDH 5-6) 70m apart at the south-western end of the zone indicates widths of 1-2m @ 0.5-1.5g/t gold, typical of the Adams Zone mineralisation below the base of oxidation.

Exploration at Quidong has been limited and has mainly been for base metals, largely guided by the Irish-type or Mississippi Valley-type model. The setting and style of carbonate-replacement gold mineralisation at Quidong shows similarities with deposits such as Mesel in Indonesia and Sepon in Laos, as well as shallow-water VHMS deposits with associated stockwork zones such as Eskay Creek in Canada. The potential for sediment-hosted structurally-controlled gold and base metal deposits is considered high, and will be evaluated in upcoming exploration programs at Quidong.