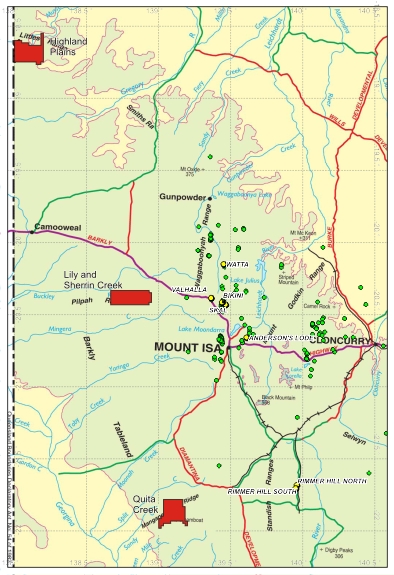 Late in 2007 a joint venture agreement was signed with Legend International Holdings Inc (Legend). Under the agreements, Legend may earn an 80% interest in phosphate minerals on the tenement package by spending $3 million on exploration and development by 7 December 2012.

Legend International Inc has transferred its joint venture interest to its subsidiary Paradise Phosphate Limited (PPL). PPL is the subject of an IPO with its prospectus lodged with ASIC on 23rd July 2012. PPL continues to explore under the terms of the Golden Cross farm-out agreement over its three 100%-owned Isa Region tenements. Historical exploration outlined phosphate resources in each of the areas and these contribute about one third of Legend’s claimed resource inventory. Around $2.85 million had been spent by December 2011. Golden Cross will retain a 20% interest in the phosphate minerals, free-carried to a decision to mine. PPL regards the GCR joint venture as “an additional growth opportunity” and intends, once listed, to continue resource definition work on the joint venture tenements.

Golden Cross retains all rights to all other minerals, including rare earth elements and uranium, which may occur in a wide variety of geological settings in the Proterozoic basement or in the Cambrian Georgina Basin which hosts the phosphate-rich strata. Legend is required to include uranium in the suite of elements assayed from all phosphate program samples. 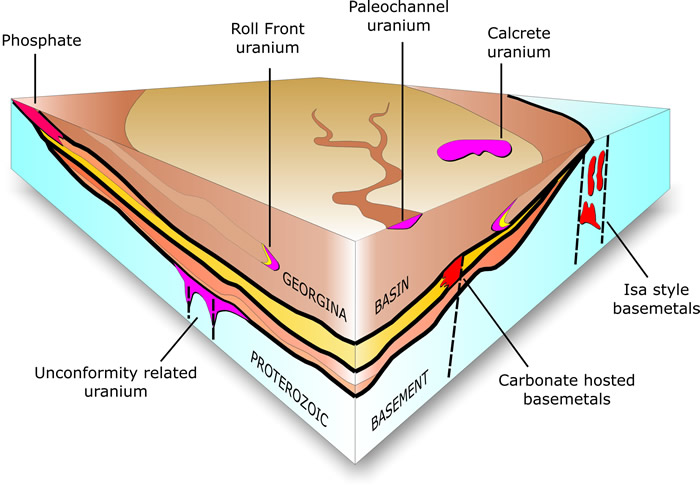 During the year, Legend commenced drilling at Highlands Plains and will continue drilling at Lily & Sherrin Creeks, where the potential exists to define direct shipping phosphatic rock.

The Mount Isa district probably represents a prospective area in Australia for the discovery of near surface uranium resources and uranium exploration is currently being conducted by several uranium-focused companies.

Other companies are currently conducting a uranium exploration program over 12,000 km2 of the Georgina Basin to the west of the Mount Isa Inlier with tenements surrounding GCR’s.   JORC compliant resources of 85.3Mlb U3O8 at their Valhalla, Andersons, Bikini, Watta and Skal projects have been announced by other explorers.  GCR’s exploration in 2012 has been inactive but when the market improves will target secondary uranium deposits in reducing environments and associated structural traps within the Georgina Basin.

The Cambrian Georgina Basin in northwest Queensland contains Australia’s largest phosphate resources. These sedimentary phosphorite deposits occur where phosphorous has been precipitated as apatite group minerals in a marine environment. The main phosphate horizon, the Beetle Creek Formation, comprises a series of phosphatic siltstones and cherts overlying limestone and basal sandstone and conglomerate.

The Rimmer Hill uranium-phosphate occurrence, which is located 100km east of Quita Creek and 20km north of Southern Cross Fertilizer Pty Ltd’s current phosphate mining operation, confirms the prospectivity of the phosphorite units to host significant uranium mineralisation. Uranium at Rimmer Hill, which occurs within bedded phosphate sediments, is probably formed by the natural reduction of uranium-bearing fluids by in situ phosphate mineralisation. 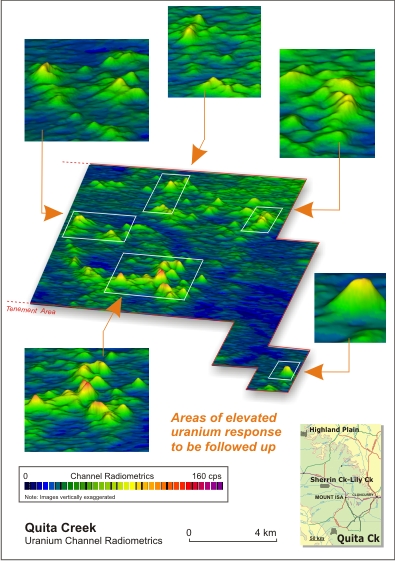 The tenement is generally covered by these phosphate rich sediments but the basement to these are ultramafics of the Mt Isa western succession which is prospective for Mt Isa style copper mineralisation.  The magnetic map of the tenement clearly shows the underlying ultramafics which have been modelled to be around 50m beneath the sediments.  A submission has been made to the QLD Government for funding assistance under the Collaborative Drilling Initiative to drill beneath these phosphate-rich sediments to the rocks of the Western Succession.  The Initiative is open to all explorers in Queensland and will pay up to $150,000 for direct drilling costs. The program planned for Quita Creek is for four holes totaling 1,000 metres of RC and Diamond drilling for which we could recover $50,000.  The drilling program is expected to commence in the second quarter of this year.

Legend recently flew detailed magnetics and radiometrics over the three tenements.  KER had the radiometrics remodelled and the results highlight several areas of anomalous uranium as can be seen by the figure opposite.  In general colours yellow to red a three to five times the average background value.  Some of these anomalous zones are several hunderd metres long.  When viewed in conjunction with the topography these zones tend to be located at the same RL which indicates that they are stratigraphically controlled.  This bodes well for locating useful uranium mineralisation and these areas will be the first to be worked on once the wet season subsides. 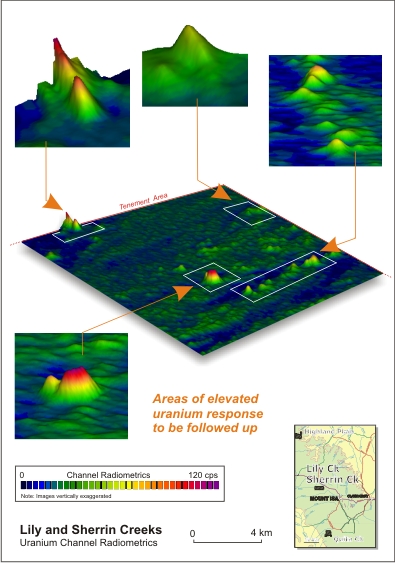 The tenement is located approximately 100km northwest of Mount Isa and a covers Cambrian sedimentary basin to the west of the Sybella Granite complex – a potential uranium source.

The property lies 50 km west of the Valhalla and Skal uranium deposits and contains two large phosphorite deposits. The primary target is secondary enrichment occurrences of uranium within the phosphate deposits.

Like in the Quita Creek tenement the new radiometric data has
highlighted several areas with anomalous uranium responses. And like Quita Creek the distribution of these anomalies with respect to topography indicates that they are stratigraphically controlled.  While there are fewer anomalies that Quita Creek those that exist are certainly worth following up once we have gained access to the area after the monsoon season. 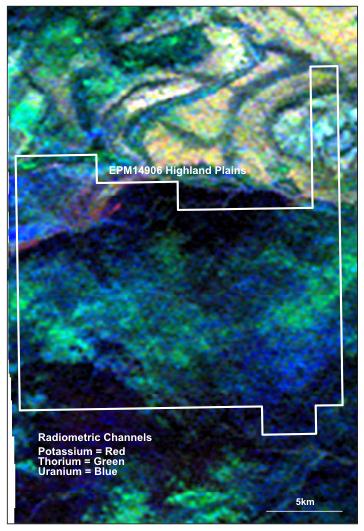 The property is located about 200km northwest of Mount Isa and 90km south of the Westmoreland uranium deposit which contains 21,000 tonnes of U3O8. The tenement also contains phosphorite mineralisation within the Cambrian sedimentary basin. The primary target for GCR is secondary enrichment occurrences of uranium within sedimentary phosphate deposits.

The Legend survey was restricted to the north-western corner of the tenement so the data was not as useful here.  However lower resolution data is available from previous explorers and the diagram to the left is a composite image of three radiometric channels with potassium coloured red, thorium coloured green and uranium coloured blue.  The white areas are where all three components are high and black areas where none of them are high.  The preponderence of green and blue in the tenement suggest that thorium and uranium are the dominant components perhaps providing potential source areas for leaching uranium for deposition in reducing environments.