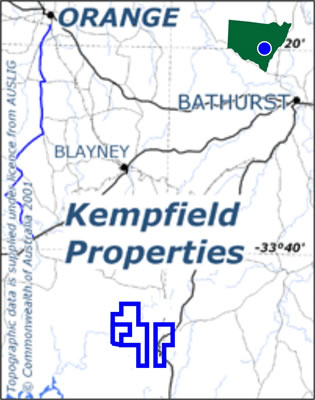 The Kempfield exploration and mining development project has been sold to Argent Minerals (ASX:ARD) for $3 million dollars in cash and ARD shares. GCR is a substantial shareholder in Argent Minerals.

The joint venture agreement negotiated between GCR with Argent Minerals Limited allowed Argent to earn 70% interest in the Kempfield project by spending $2,745,000 by 2013. Argent achieved this in March 2011 and the silver-lead-zinc project is now in the definitive feasibility study stage and heading for production at a time of high silver prices.
Kempfield is located 29 kilometres due south of Blayney and 57 kilometres south-southeast of Orange in the headwaters of Rocky Bridge Creek. It is accessed by 9 kilometres of unsealed all weather road from the town of Trunkey Creek in the Evans Shire, New South Wales.
Argent has conducted several major drilling programs to define and extend the resource at Kempfield and to test the continuity of broad intervals of silver-lead-zinc mineralisation intersected in previous holes. Results were encouraging, in that broad intervals were intersected in both the McCarron West and Mather zones. The intersected mineralised zones are characterised by higher grade lenses within a broad envelope of lower grade material. Recent drilling programs by Argent to test for depth extensions of the zones and to determine the continuity of the higher grade lenses have been successful.
GCR acquired the project from the titleholder Metallic Resources in 1998, and prior to Argent’s entry had drilled a total of 7,091 m of RC and 278.25 m of diamond core as well as conducting metallurgical testwork and regional and detailed geological mapping and geochemical sampling since acquiring the property.
Seven zones of higher grade mineralisation have been identified along a 3km strike length of mapped barite horizons contained within the volcanogenic base metal system.