The Burra Project [EL 7389] is located 40km east of Cobar in the highly prospective Canbelego-Mineral Hill volcanic belt in central NSW, part of the Lachlan Fold Belt. (Figure 1) Mineralisation at Burra is both stratigraphically and structurally controlled. The two key prospects, Burra and Block 51, lie within a basal sequence of Devonian sediments and volcanics, above an unconformable contact with Ordovician Girilambone Group sediments. Although the Burra Fault is a major NW-SE trending structure in the Burra area, ore lenses are more closely related to smaller-scale cross-cutting structures including faults and fracture zones and possibly fold hinges. The Burra and Block 51 mineralised zones are characterised by coincident magnetic anomalies and copper-in-soil geochemical anomalies (Figure 2), and a third magnetic anomaly (so far untested) lies further to the southeast. A significant VTEM anomaly has been defined beneath the Burra Mine within the footwall volcanics (Figures 7 & 8). 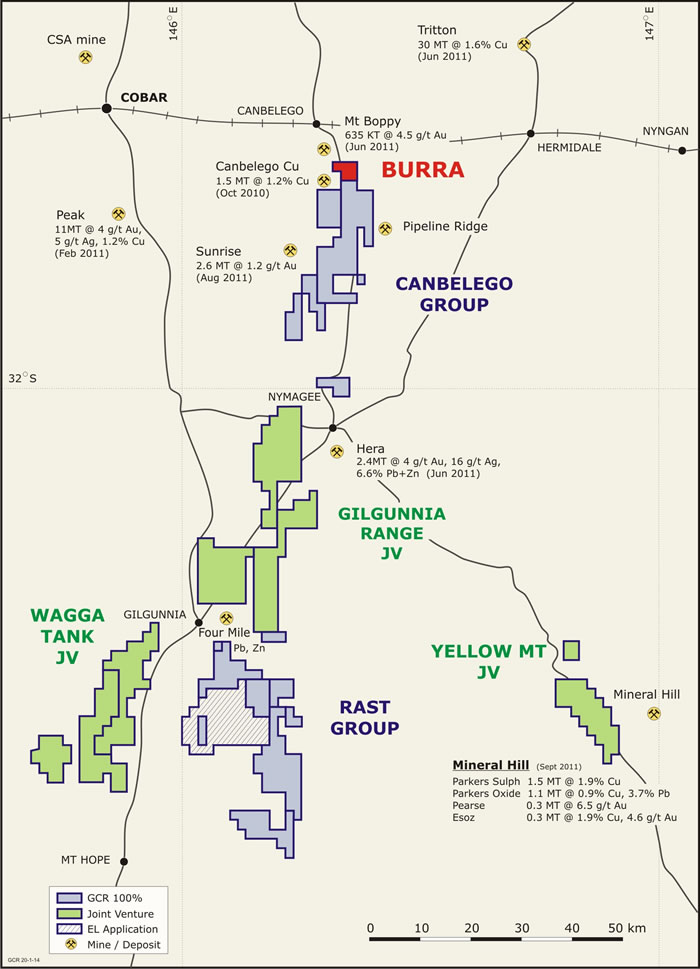 The Burra Project has good potential for the discovery of Cobar-style deposits, with copper and lead-zinc mineralisation with gold/silver credits intersected in most drill holes. There are sufficient ore grade intercepts at the two key prospects to remain optimistic that economic lenses exist at depth. The lode geometry is complex, but encouraging copper intersections have been found over a strike length of 200m, and a VTEM survey has located a prominent electromagnetic conductor at depth below all previous GCR drilling at the Burra copper mine (Figures 7 & 8). The coincident nature of the airborne magnetic anomaly and the VTEM conductor at Burra is typical of the geophysical expression of several Cobar-style deposits. 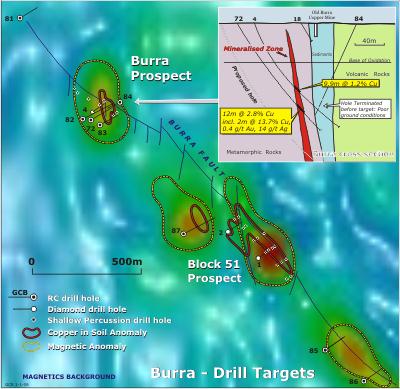 The historic Burra Copper Mine recorded minor copper production in the late 1880’s. Drilling programs in 2008 and 2009 followed-up earlier intersections achieved by Golden Cross in 2004, including 10m at 3.3% copper from 138m, including 2m at 13.7% copper.

The 2008 drilling program at the Burra copper prospect intersected significant sulphide mineralisation grading up to 6.45% copper (see Table 1 and Figures 2-4):

The 2009 drilling program totalled 1,530m comprising 827m of RC and 703m of HQ cored tails. The six holes were designed to test for extensions of sulphide mineralisation intersected by previous RC and core drilling. The results shown in Table 1 confirm a 200m long lode system with steeply plunging shoots including multiple economic-grade intersections typically around 10m @ about 1% copper.

The 2009 intersections indicate down-dip potential, with the mineralisation showing typical Cobar-style characteristics.  Future drilling will be directed to test the zone at depth, as Cobar-style lenses generally have short strike lengths but deep extensions. 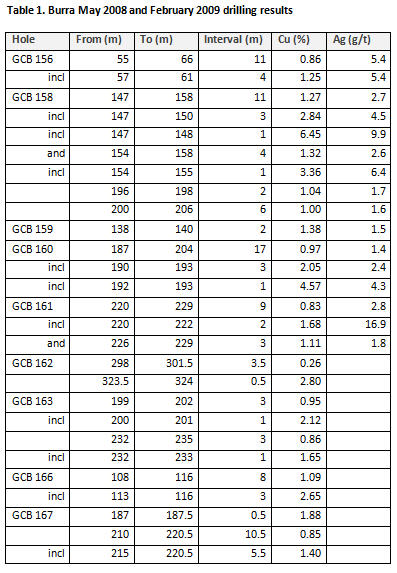 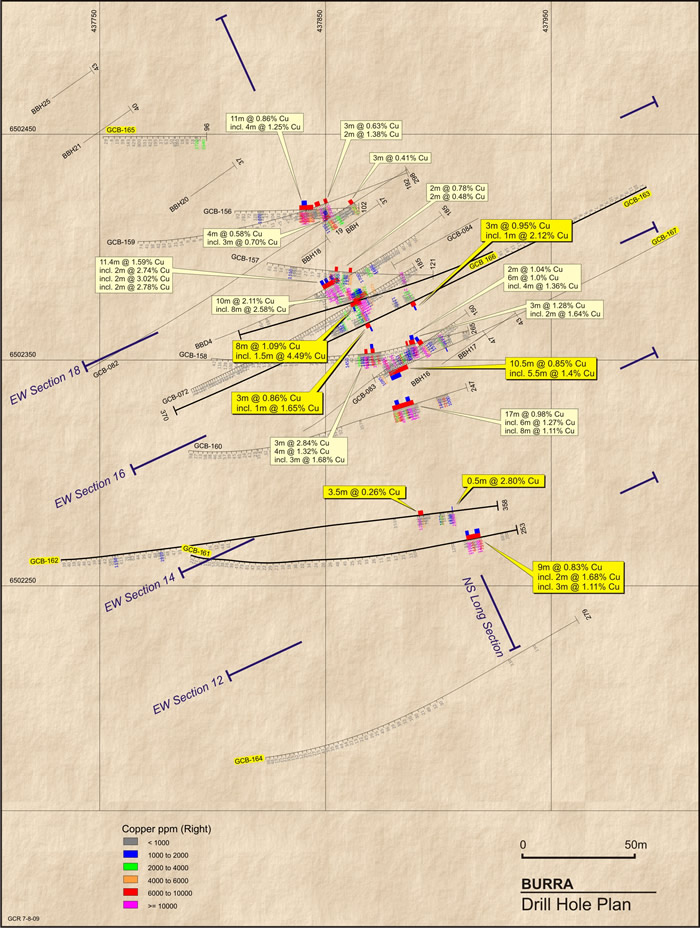 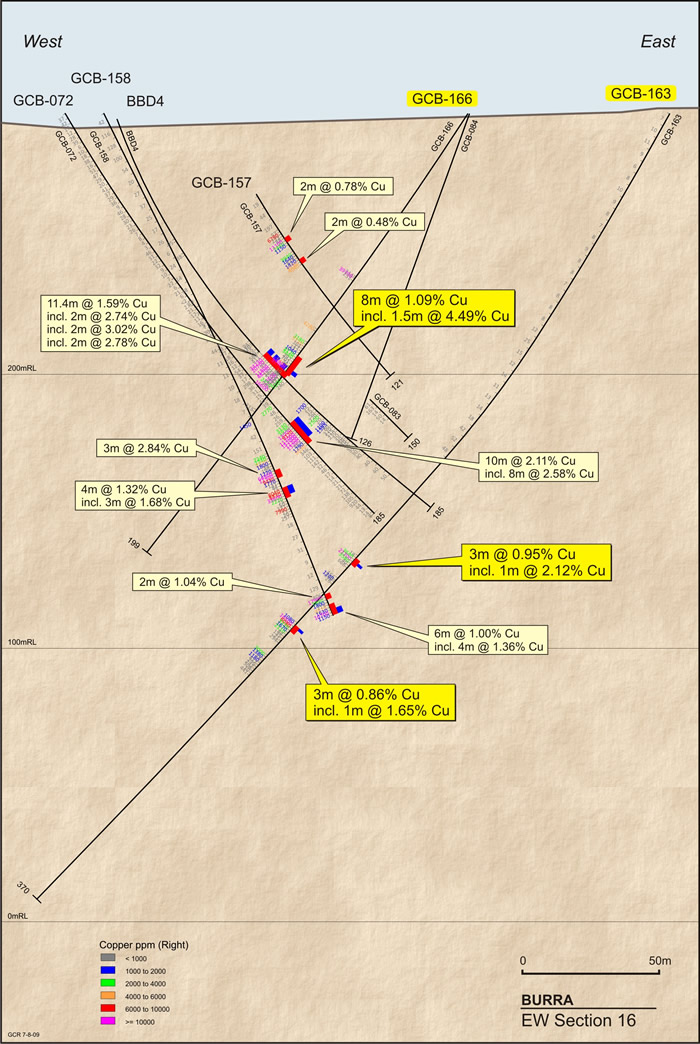 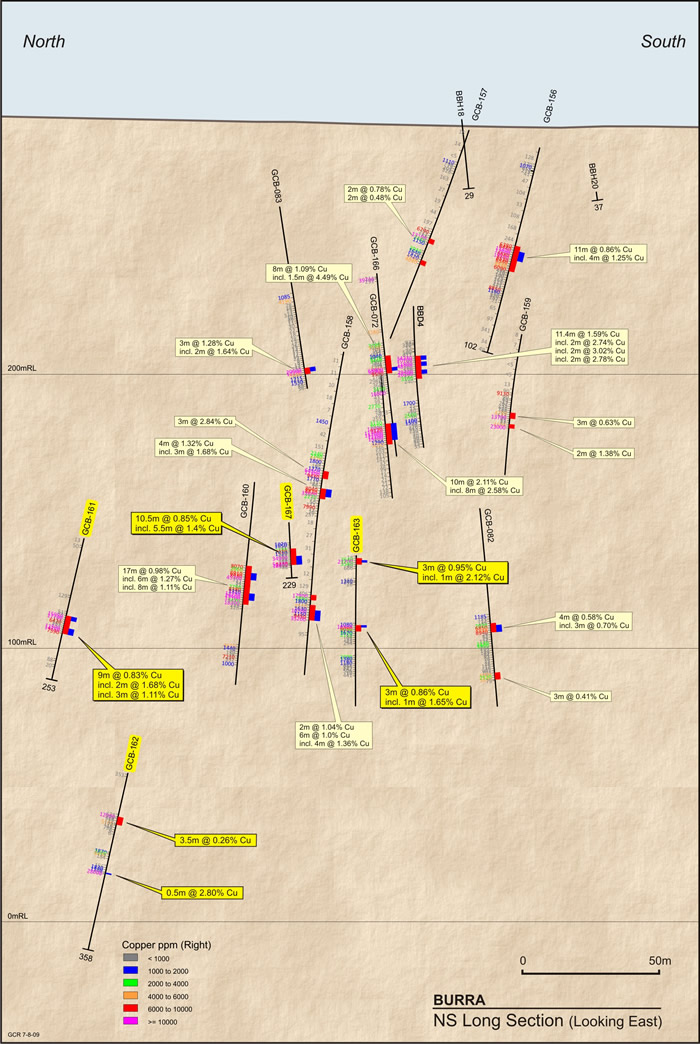 A 3D spin-through of the historical underground workings with drill hole intersections can be viewed below.  In the spin-through the grey sheets are faults, the green sheet is a wireframe of the unconformity believed to be associated with the mineralisation, and the underground workings are in orange.  The drill traces have been coloured according to copper grade with the following colour scheme:

The Block 51 prospect is located 1km to the southeast of the Burra prospect, and has a mineralised zone with a NW-SE strike length of 400m.

In December 2009, five RC holes [GCB 168-172] were drilled at Block 51. Encouraging results were returned by holes all except GCB 168 and GCB 171 which were impeded by high volumes of groundwater. Important intersections included:

Each of these copper [+ Au, Bi, As] intercepts may be indicative of stronger mineralisation at depth, typical, once again, of Cobar-style deposits. In addition, a 2011 review of historical geochemical data identified zones of elevated copper-in-soil for follow-up sampling at the Geweroo prospect and just south of Block 51.

In January 2010, a heliborne VTEM (Virtual Transient Electro-magnetic) survey was conducted in collaboration with neighbouring tenement holders. Of a total of 566 line kilometres, 107.7 line-kilometres were flown at a 200m line spacing over the Burra Project area with a further 39.8 line-kilometres of 100m spaced infill lines. In addition, Golden Cross collaborated with an adjoining explorer in 2011 to conduct a close spaced aeromagnetic survey, which complemented the VTEM survey, resulting in an improved dataset for targeting purposes. 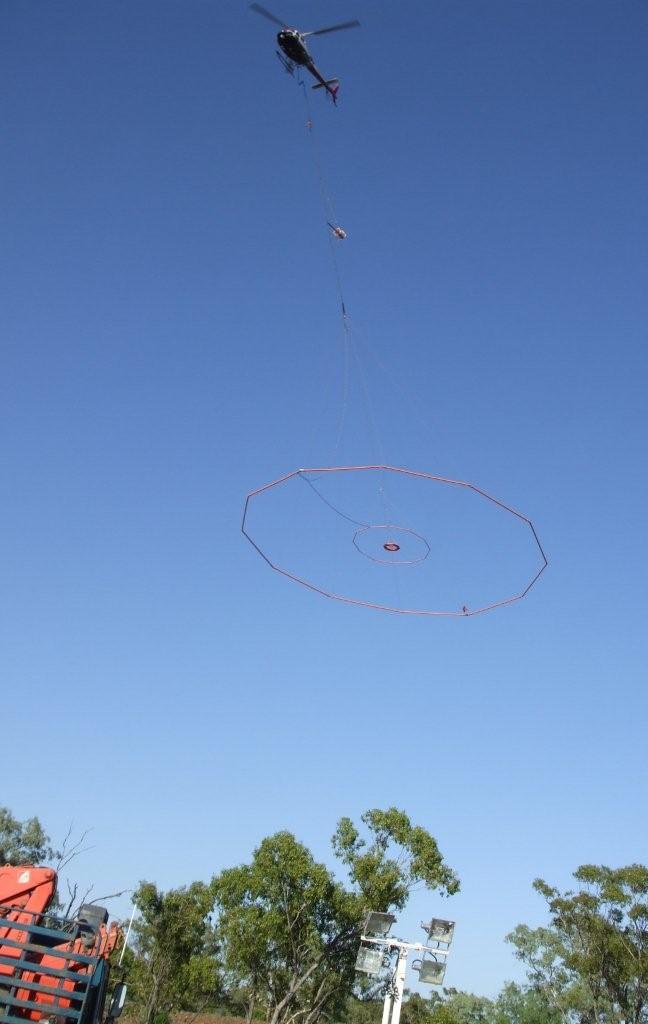 Re-processing of the airborne VTEM and magnetic data has yielded anomalies requiring follow-up work. In particular, a prominent VTEM anomaly lies beneath the Burra copper mine workings and below the depth of GCR’s current drilling (see Figures 7 and 8). 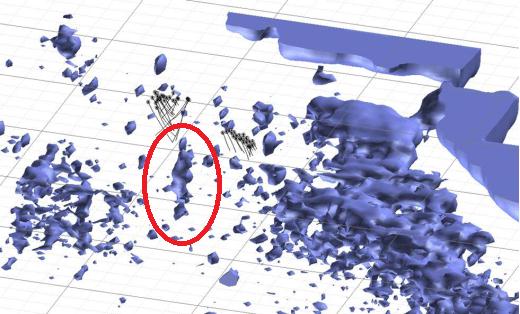 The Burra prospect shows all the characteristics of a typical Cobar-style copper (lead-zinc-gold) deposit: short strike length/narrow width, but with potential for great depth extent. The VTEM conductor extends from approximately 300m to 800m below the surface and is shown in the perspective view below. It may be caused by a Cobar-style deposit and presents GCR with an exciting drill target. 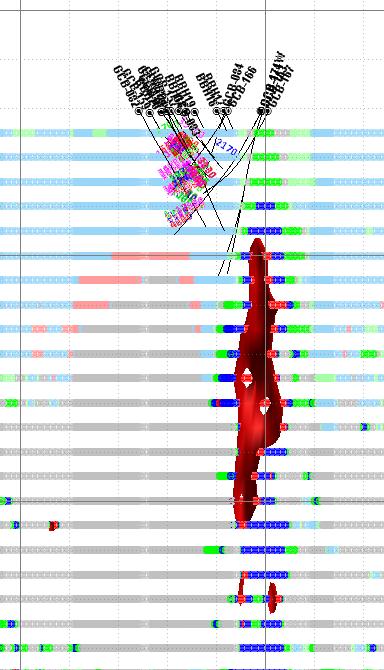 Figure 8. Cross-section showing previous drilling with new VTEM anomaly (in red) below the Burra Mine.

Golden Cross plans to advance the Burra Project with follow-up drilling of the existing mineralisation, the new VTEM conductor at Burra and at Block 51. Additional geochemical sampling is planned at the southeast magnetic anomaly. If a discovery can be made at Burra there are several  potential development options, with a number of operating mines and mills within a 75 km radius at Cobar and near Girilambone.